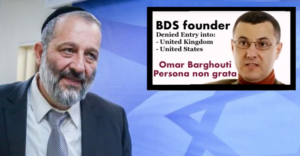 Israel’s Interior Minister issues an edict seeking a legal opinion for the permanent revocation of the Israeli residency visa given to Omar Barghouti, the co-fonder of the anti-Israel Boycott, Divestment and Sanctions movement.

Interior Minister Aryeh Deri on Sunday ordered the Population and Immigration Authority to prepare a legal opinion on the revocation of the Israeli residency of Omar Barghouti, the co-founder of the anti-Israel Boycott, Divestment and Sanctions (BDS) movement.

Minister Deri’s decision was made following an announcement by Deputy Attorney General Dina Zilber regarding the authority of the Interior Minister to deprive Barghouti’s residency.

For years, Barghouti’s case has been discussed on the grounds that he could not enjoy the status of a resident of Israel and enjoy benefits while working to impose a boycott on Israel and leading the BDS movement in Israel. However, the issue was pending an amendment of the law which clarified the Minister of Interior’s power to revoke residency for breach of trust.

Following the change in the law, Deri asked that a legal opinion be prepared to cancel Barghouti’s residency.

“I intend to act quickly to deprive Omar Barghouti of the residency status in Israel. This is a man who does everything to harm the country and therefore must not enjoy the right to be a resident of Israel,” Deri stressed.

The Qatari-born Barghouti is a resident of the Israeli city of Acre, and was granted a permanent residency permit due to his marriage to an Israeli Arab.

Despite advocating for a worldwide economic, cultural and academic boycott of Israel, Barghouti received a Masters degree from Tel Aviv University and is currently studying for a PhD there.

Last month, Barghouti was denied an entry visa to the UK, where he was due to speak at a number of fringe events at the Labour party conference.

The Palestine Solidarity Campaign (PSC) blamed his lack of a visa on “growing efforts by Israel and its allies to suppress Palestinian voices and the movements for Palestinian rights.”

Barghouti was recently refused entry into the United States because of his role as founder and chairman of the BDS movement.