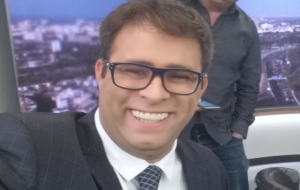 Unfazed by a threat from the pompous Jordanian parliamentarian to beat him up, MK Oren Hazan, tweets in response, “I accept the Jordanian MP’s invitation to a meeting on the bridge, and at 10:00 a.m. tomorrow [Wednesday].”

A Jordanian Member of Parliament this week invited MK Oren Hazan (Likud) to a meeting at the Allenby Bridge, to take place on Wednesday.

In a national embarrassment, Oren Hazan forces a selfie on President Trump upon arrival to Israel – Twitter/Oren Hazan

The Jordanian parliamentarian, however, left little doubt about the nature of the meeting with Hazan, writing, “I will beat you up, you despicable person hiding behind American aid.”

Hazan, unfazed by the threat, tweeted in response, “I accept the Jordanian MP’s invitation to a meeting on the bridge, and at 10:00 a.m. tomorrow I will arrive at the Allenby Bridge for an eye-to-eye discussion. I have an offer that he will not be able refuse.”

However, Hazan made clear that he would coordinate his arrival with security officials and will not take risks. “I will not cross the bridge into Jordan, but I will try to organize a meeting at the crossing,” he stressed.

The reason behind the angry invitation of the Jordanian MP is a tweet published by Hazan following last week’s incident involving an Israeli security guard near the embassy in Amman.

“It appears as though our neighbors east of the Jordan River, those who we provide with water and protest day and night, need some re-education. It’s beginning to feel like we should say goodbye permanently,” wrote Hazan in that tweet, which sparked anger in Jordan.

Jordan is one of two Arab countries, the other being Egypt, to have signed a peace treaty with Israel.

The country’s parliament, which is made up mostly of Islamists, remains anti-Israel and its members have more than once called to annul the peace treaty.

Last month, a Jordanian MP praised soldier Ahmed Daqamseh, who in 1997 shot dead seven Israeli schoolgirls, saying he was a hero because he was retaliating against Israel and the teenage girls were “enemies.”

Also last month, the speaker of Jordan’s House of Representatives, Atef Tarawneh, praised the terror attack on the Temple Mount in which two Druze police officers were murdered.