In their first meeting, Israeli and Palestinian finance ministers have agreed on a series of economic cooperation projects. 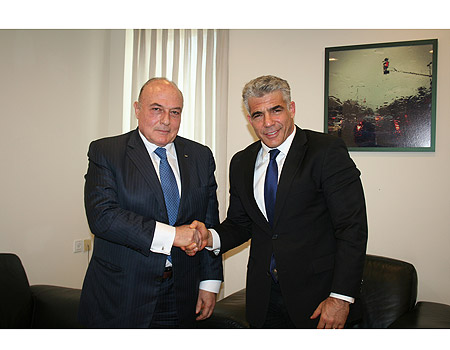 Lapid said cooperation would include joint investments and trade between the sides. He said it would benefit both and vowed to “continue to strengthen the connection and promote important economic issues that are important to both sides.”

Lapid’s office said that during the meeting the two decided on a timetable to renew economic ties between Israel and the Palestinians – ties that have been frozen for the last six-months.

According to both Israeli and Palestinian officials, the initial aim of the talks was to relaunch regular meetings on technical issues such as crossing points; fuel, power and water supplies to the Palestinians; and payment for treatment of Palestinians in Israeli hospitals.

Also, according to agreements signed following the 1993 Oslo Accords, the difference in VAT tax rates between Israel and the Palestinian Authority can be no more than 2% – a rule designed to prevent Israelis from travelling to the Palestinian territories in search of cheaper goods. As a result, when Lapid recently raised the Israeli VAT by 1%, the Palestinians’ VAT was also raised.

We have to raise our VAT from 15% to 16%,” says Samir Abdallah of the Palestine Economic Policy Research Institute.

AP, jn1.tv contributed to this report