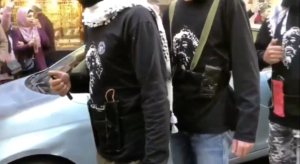 A dozen masked men brandishing assault rifles spearheaded the march, firing several rounds in the air. Some also donned fake suicide vests, as a nod to the group’s past attacks on Israel.

More similar demonstrations are expected across the West Bank, known in Israel as Judeah and Samaria, in the coming days.

Dating back all the way to 1959, Fatah has led the armed struggle against Israel for decades as the backbone of the Palestine Liberation Organization.

On January 1 1965, the same year when Fatah asserted itself as a political party rather than a movement, it launched its first major attack against Israel, planting a bomb near its National Water Carrier; the explosive did not go off and was subsequently found by the Israeli security forces.

The PLO recognized Israel in the early 1990s at the start of the peace process, and since then has officially committed to a two-state solution.

In 2007, Fatah was thrown out of the Gaza Strip in a coup by Hamas, a rival movement with a more Islamist agenda.

Since then, the relations between the two groups have been strained, with yet another spat simmering in the recent days as Hamas accused Fatah of helping Israel assassinate a commander in an allied Gaza faction — and Fatah took a jab at Hamas, accusing it of caving in to Israel and Trump.