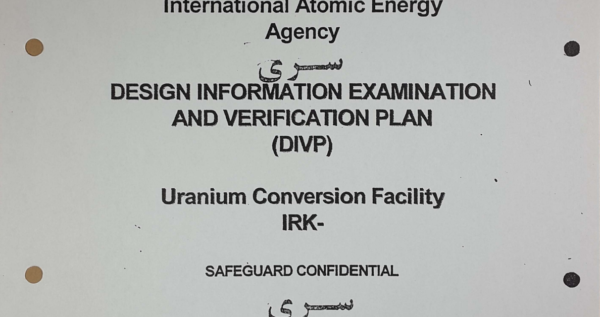 IAEA Director-General Rafael Grossi released a report to the agency’s Board of Governors a day to earlier estimating that Iran had enough enriched uranium for a nuclear weapon, 18 times more than the 2015 deal with world powers permitted.

How do we know?
Because we got our hands on Iran’s deception plan.

The IAEA has been investigating possible military dimensions of Iran’s nuclear program and nuclear sites that the Islamic Republic has not disclosed. One of Iran’s demands in negotiations to renew the nuclear deal was to close the probe.

“Iran has not provided explanations that are technically credible in relation to the Agency’s findings at those locations,” Grossi wrote. One of the documents released by Prime Minister Naftali Bennett about Iran’s attempts to hide its nuclear program. – Photo curtesy: State of Israel

“The Agency cannot confirm the correctness and completeness of Iran’s declarations under its Comprehensive Safeguards Agreement.”

The future of the IAEA investigation is expected to come up in its Board of Governors meeting on June 6.

Bennett cited documents from the Iranian nuclear archive smuggled to Israel by the Mossad in 2018, which show that Iran used information from stolen classified IAEA documents in 2004-2005 to reassure the agency that it is not carrying out clandestine nuclear activities. 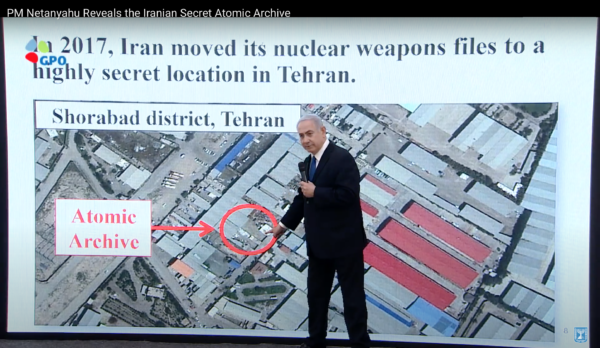 Then PM Netanyahu Reveals to the world the Iranian Secret Atomic Archive, smuggled in its entirety, out of Iran by the Mossad in 2018.  – YouTube screenshot

Displaying the documents via a link to a Google Drive, Bennett added: “Here it is, in the Persian language, hundreds of pages marked with the stamp of Iran’s Ministry of Intelligence. There are even some handwritten notes on the documents by senior Iranian officials — like this one, written by then-defense minister to [Iran nuclear program chief Mohsen] Fakhrizadeh. He writes: ‘Sooner or later they (referring to the Atomic Agency) will ask us — and we’ll need to have a comprehensive cover story for them.’”

“Iran lied to the world, Iran is lying to the world again right now, and the world must make sure that Iran doesn’t get away scot-free,” Bennett stated.

“Iran lied to the world, Iran is lying to the world again right now, and the world must make sure that Iran doesn’t get away scot-free,”

Despite past IAEA reports critical of Iran, the Board of Governors has hesitated to censure Tehran, in the interest of advancing negotiations to revive the Joint Comprehensive Plan of Action, as the 2015 nuclear deal was called.

Those talks have stalled for months, due to an Iranian demand that the US remove the Islamic Revolutionary Guard Corps from its Foreign Terrorist Organizations list.

However, an Israeli diplomatic source expressed concern on Tuesday that Iran could still evade consequences due to political pressures.

US President Joe Biden informed Bennett in a phone call last month that the administration will not change the IRGC’s status, even at the expense of a new nuclear deal. Bennett confirmed a report in Politico on the decision last week, praising Biden as “a true friend of Israel who is concerned about its security.”

The IRGC is “the world’s biggest terrorist organization,” he said. “This is the right, moral and just decision by President Biden.”

This is old news. It was originally made public when Netanyahu was PM. That’s most likely how the WSJ had the information to publicize now.

It was proper that PM Bennett only acknowledged the veracity of the report and didn’t take credit for what was obviously a Mossad operation when Netanyahu was in office.

But, why now? The Biden admin is just as corrupt & inept as the Obama regime ever was. Maybe someone at the WSJ finally wised up and understood exactly what danger the Biden White House was putting Israel (and the Arabs Gulf States that joined the Abraham Accords) in.

Iran will very much be an existential threat to Israel if allowed to attain a nuke, as the Obama/Biden JCPOA agreement stipulates.
(…and btw, THAT’S precisely why Trump withdrew from the agreement!)