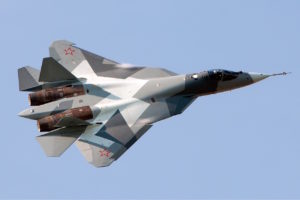 On Saturday satellite operator iSi released a statement saying that their Israeli Eros B satellite spotted the two jets which are not fully operational.

The deployment of the jets comes two months after Russian President Vladimir Putin ordered a partial withdrawal of Russian troops from the war-torn country.

The fifth-generation Su-57 stealth fighter jets are fitted with a sophisticated avionics system and an active airborne phased array radar which allows the advanced jet to detect air, ground and naval targets at significant distances.

According to the Russian Defense Ministry, a total of 12 Su-57s were initially ordered by the Moscow and the jets were scheduled to be introduced to Russian forces this year.

Russia has been accused of using Syria as a testing ground for new weaponry, including its Su-34 fighter jet which has since been sold to Algeria with many others such as Indonesia, India, Uganda and Nigeria expressing interest since the jet became active in the Middle-Eastern country.

Speaking to the Russian news network Sputnik, Vladimir Gutenov, chairman of the Military Industry Committee in the Russian parliament said Friday that while he could not confirm the deployment of the stealth fighter jets he “wholeheartedly welcomed” the reports as the jets “need to be tested in combat conditions, in conditions of [enemy] resistance.”

Furthermore, he said, their presence will no doubt send a message of deterrence “for aircraft from neighboring states which periodically fly into Syria uninvited.”

As a fifth-generation jet designed for attack roles it is Russia’s response to the American F-22 Raptor and F-35.

The F-22 which was just deployed to Syria following an attack against US-backed forces by pro-Syrian troops which included Russian mercenaries on February 7.  The next week two F-22 intercepted two Russian aircraft after they crossed the “deconfliction line” that is supposed to separate US and Russian aircraft operating over Syria multiple times.

According to defense officials who spoke to CNN a Russian SU-35 jet was also involved in the incident which lasted “several minutes.”

The F-35, of which Israel has nine (and is expecting to receive 50 planes over the next few years to make two full squadrons by 2022) has an extremely low radar signature and is supposed to able to operate undetected deep inside enemy territory as well as evade advanced missile defense systems like the advanced Russian-made S-300 missile defense system which has also been deployed in Syria.

While the F-35 has been declared operational by Israel’s Air Force in December the plane is not believed to have yet been used in a combat situation.

Moscow intervened in the Syrian conflict in September 2015  and officials from Israel and Russia  meet regularly to discuss the de-confliction mechanism implemented a system over Syria to coordinate their actions in order avoid accidental clashes in Syrian airspace.