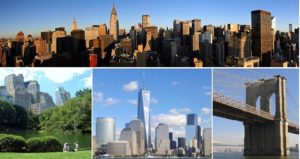 According to the report, Israeli-founded companies generated more than $18.6 billion in direct revenue in 2018 alone, and $33.8 billion in benefits to the New York economy. These remarkable numbers are due in most part to the 5 Israeli-founded “unicorns,” or startups valued at over $1 billion. The Israeli companies now based in New York are: Compass, Lemonade, Payoneer, Taboola, and WeWork.

Silicon Alley, once centered around the Flatiron District, is now metonymous for New York’s high tech sector, which has since expanded beyond the area.- Photo: Dave Lindblom/Wikimedia

There are 506 Israeli-founded companies in New York providing 24,850 jobs and another 27,502 indirect jobs for additional support services to the companies.

Israel is having a huge impact on one of the world’s richest and most important cities, according to the report. “It’s nearly impossible to walk a block without encountering its influence. Israelis are impacting retail, city skylines, and shared working spaces. They are teaching courses at the Jacobs Technion-Cornell Institute, and engineering the algorithms that guide on-demand ride-sharing vans around the city.”

Why is Israel so successful?

The report concludes that because the country lacks natural resources, has a small domestic market with closed borderers surrounded by enemy nations, Israeli businesspeople and entrepreneurs had to come up with creative solutions and new technologies to overcome these and other challenges. Necessity has pushed the young Jewish nation to pioneer technologies like making the desert bloom or harnessing the sun to power electricity and charge batteries to run busses.

Today, Israel is nicknamed “Start-Up Nation,” and much of that reputation comes from the young men and women who gain multiple skills while serving in the Israel Defense Forces (IDF). Israel’s combat soldiers use thermal optics, GPS navigation systems, and encrypted communication devices every day on the battlefield. The IDF is second-to-none in cybersecurity.

By the time Israelis enter university after their military service, many of them have served as commanders over hundreds of soldiers and led teams facing tactical life-threatening national defense scenarios daily on the battlefield. “They are by definition risk-takers,” say Saul Singer and Dan Senor in their best-selling book Start-Up Nation about the Israeli tech success. The army has also taught them the necessity of teamwork, together with clear lines of command.

All of these skills have contributed to creating a generation of young Israeli entrepreneurs now leading some of the world’s largest companies and developing many of the technological advances that are improving the lives of people around the globe.