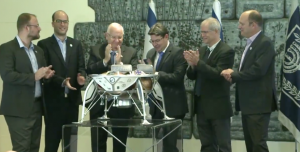 With the deadline to win a $20 million first-place prize just two years off, pressure is mounting on the 16 rivals from around the world hoping to complete a privately funded moon landing.

A model of an Israeli spacecraft is displayed at a meeting between President Reuven Rivlin and Israeli space team, SpaceIL, in Jerusalem, Wednesday – Photo: Reuters

Silicon Valley’s Moon Express announced a week ago that it had signed a contract with Lockheed Martin-backed Rocket Lab. But Israel’s SpaceIL is the first team to have a launch agreement reviewed, verified and accepted by XPRIZE, the group overseeing the contest.

“The magnitude of this achievement cannot be overstated,” said XPRIZE President Bob Weiss. “This is the official milestone that the race is on. … They’ve lit the fuse, as it were, for their competitive effort.”

The key hurdle was finding an affordable ride to outer space without government funding, said Eran Privman, CEO of SpaceIL.

Because his team’s spacecraft is much smaller than most competitors — it looks like a robotic, four-legged table, about 1.5 meters (4 feet 11 inches) tall and wide — the SpaceX Falcon 9 launcher can carry 20 small satellites whose fares will help cover costs, Privman said.

“Other teams are trying to find such solutions,” he said.

SpaceX is a private company owned and operated by technology entrepreneur Elon Musk.

Much work remains. SpaceIL must manufacture hardware to fit the rocket and only then can it be shipped to the United States, Privman said.

The mission is scheduled for late 2017, just before the contest deadline. Once exiting the rocket in space, the Israeli craft will make its journey to the moon.

To win, a privately funded team must place an unmanned spacecraft on the moon’s surface that can explore 500 meters and transmit high-definition video and images back to earth.