Technology developed by head of the Weizmann Institute of Science’s Energy Center creates mixture that can be used for car fuel.

A new Israeli solar Technology is able to transform greenhouse gas emissions from the dirtiest of pollutants into a useable fuel for automobiles.Israeli startup NewCO2Fuels Ltd., in partnership with Australian firm Greenearth Energy Ltd., has acquired the license for a technology developed by Prof. Jacob Karni, head of the Weizmann Institute of Science’s Energy Center in the department of environmental sciences and energy research, as well as supervisor for the institute’s solar program. 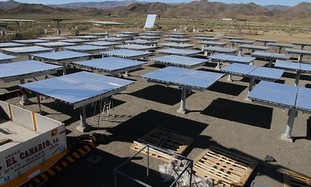 The Syngas, in turn, can be converted into methanol for vehicular use.

Karni’s research, which was conducted in partnership with Dr. Avner Rothschild from the Technion, received a $200,000 grant from the Silicon Valley-based organization Israel Strategic Alternative Energy Foundation in 2010.

Logistically, the solar heat generation occurs on parabolic dishes, which reflect the light captured to a reactor, a focal point of the parabola that allows for extremely high temperature generation, explained David Banitt, the CEO and major shareholder of NewCO2 Fuels. At the reactor site, the carbon dioxide enters and splits due to the heat, with carbon monoxide exiting through one pipe and oxygen through a second, Banitt told The Jerusalem Post. The same process applies to water, for hydrogen and oxygen.

“The process becomes much more effective if it’s performed at much higher temperatures,” he said.

The hydrogen and carbon monoxide can then come together to form Syngas, which in turn can be converted into methanol for fuel.

Methanol is already in use for vehicle propulsion in several countries around the world, and a Dor Chemicals and Ten Gasoline partnership is currently performing an experiment in Israel with a blend of methanol and benzene.

“We would like to produce methanol that would be cost competitive to gasoline,” Banitt said.

While the solar reactor technology can be applied to any type of emissions that include carbon dioxide – essentially, all fossil fuels – brown coal, which has an extremely high presence in Victoria, Australia, emits enormous amounts of carbon dioxide. Brown coal features about six to eight time more carbon dioxide than, for example, natural gas, and therefore, Australia has limited its use.

Having acquired the technology license, NewCO2Fuels intends to begin a pilot project soon, presumably in Israel, and will likely launch its first commercial site in Australia, as its partner is an Australian firm. However, the company is also open to markets in the United States and China, according to Banitt.

“The possibility of converting carbon dioxide to fuel in a clean and efficient manner will turn brown coal into a source of environmentally friendly fuel,” the Weizmann Institute said.