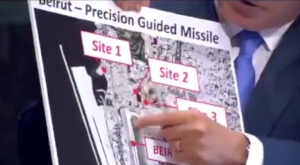 The report reveals that the sites are used for the production, storage, and launches of medium-range surface-to-surface ballistic missiles, such as the Iranian Fateh-110 and its Syrian equivalent, the M600.

“The world must understand and know that these launch sites are located in the very heart of residential and urban areas,” the head of the research department at the Alma Center, Tal Beeri, told JPost. “Hezbollah uses the population of Beirut as human shields, and does not hesitate to place its launch sites near public buildings, educational establishments, factories, and more.”

Hezbollah is said to have around 600 Fateh-110 and M600 missiles with a range of up to 300 km (185 miles), the report said, adding that, “the sites in question are already available and operational.”

Prime Minister Netanyahu WARNED the UN in 2018 of Hezbollah stockpiling missiles near civilians in #Beirut.

The UN decided to remain silent and ignored this. Shame on them! #LebanonExplosion pic.twitter.com/Vk7IClU42I

The Alma Center noted that its report relied on information published on Wikimapia.org, by a user identified as “Dalany_Mokus,” who could be “a Russian citizen supporting the Syrian regime of Bashar al-Assad.”

Senior Israeli security officials have been warning for years against Hezbollah’s precise missile production apparatus backed by Iranian funds and manpower, even labeling Lebanon as “one large missile factory.”