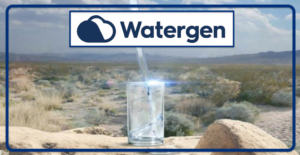 The tech industry’s top ‘smart home innovations’ are selected each year at the Consumer Electronics Show in Las Vegas, where the Israeli tech company Watergen, received the 2020 top honor for its home appliance Genny, that extracts potable water from thin air.

GENNY, the Israeli-innovated home appliance that generates water out of thin air, was named the Consumer Technology Association’s Energy Efficiency Product of the Year in the 2020 Smart Home Mark of Excellence Awards at the Consumer Electronics Show (CES) in Las Vegas Wednesday night – an award series that annually recognizes the tech industry’s top smart home innovations.

Created by the environmentally savvy Rishon Lezion-based tech company Watergen, the water-from-air system taps into atmospheric water using patented heat-exchange technology, producing up to 30 liters of potable water for a home or office every day – significantly reducing plastic usage and disposal by eliminating the waste caused by drinking bottled water.

How exactly does the system work? First, Watergen’s built-in blower draws air into the system’s atmospheric water generator. There, an internal filter cleans the air by removing dust and dirt. Once clean, the air is directed through the GENius heat exchange and cooling process, and condensed into water.

The water is then filtered again to remove impurities and add minerals, resulting in fresh, drinking-quality water. Once produced, the water is continuously circulated in a built-in reservoir to preserve its freshness.

The water produced by GENNY is therefore often of a higher quality than water running through filtration systems attached to municipal water lines.

GENNY also has the potential to serve as an air purifier, circulating clean air throughout homes through a small tweak in the water generation process, using the already existing technology to create a multipurpose product.

“Our company’s mission is to eliminate the need to rely on outside sources for life necessities and to help people become more environmentally friendly,” said Dan Clifford, president of Watergen North America. “We are especially honored to be named Energy Efficiency Product of the Year at this year’s CES show, because this award directly supports one of the top values Watergen stands for.”

The company, chaired by Israeli-Georgian businessman and philanthropist Mikhael Mirilashvili, recently set its sights on expanding its renewable and energy-efficient clean water solution to the 2.1 billion people worldwide who lack access to safe water at home – and wherever else it might be needed.

Last year, the company’s large-scale system was donated to authorities in Brazil, Vietnam and India. It also assisted rescue and recovery efforts during the 2018 California wildfires and provided clean water to the residents of Texas and Florida in the aftermath of the devastation caused by hurricanes Harvey and Irma.

The large-scale version, called Gen-L, can produce up to 5,000 liters of clean water a day, requiring no infrastructure other than a standard electricity supply. According to the company’s website, it is “perfect for villages, off-grid settlements and factories.”

While the technology is now firmly focused on tackling the global water shortage, the company has maintained the energy-efficient edge of its early-day designers and boasts the world’s most energy-efficient atmospheric water production system.

“My first priority is not how to make money but to help people, the planet and make [a] kiddush hashem [sanctification of God’s name],” Mirilashvili told The Jerusalem Post. “Regarding the revenues, only God decides who makes money and how much.”

Eytan Halon contributed to this report.