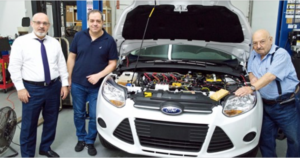 After simple modifications to existing automotive engines, this revolutionary ‘green’ engine is up to 60% more efficient than the gasoline version and will even save 50% on fuel costs and produce far fewer emissions than gasoline or diesel.

In the annals of business, successful companies that originated in the garages of their founders have assumed an almost mythic significance. Corporate giants such as Apple, Google and Hewlett-Packard all began in small workshops adjacent to their creators’ homes. Now, another small, garage-based family business run by three Israelis near Miami, Florida, that says that they have succeeded in reinventing the internal combustion engine is aiming to join the elite group of legendary garage-based startups.

The company is called MayMaan Research, LLC, and it has developed a system to operate a traditional piston engine with a combination of 70% water and 30% ethanol (or any other alcohol) – no gasoline or diesel required. This revolutionary system can be applied, say its founders, with simple yet sophisticated modifications of existing engine designs, and saves 50% on fuel costs, produces far fewer emissions than gasoline or diesel, and is up to 60% more efficient than gasoline. MayMaan has built four operating prototypes to date, including a car, a generator and various engines. While the company has outgrown its garage-based origins, and has grown into a research laboratory facility, it remains imbued with a start-up spirit.

MayMaan is the brainchild of Yehuda Shmueli, 81, a talented inventor, engineer and master mechanic. Assisted by sons Eitan and Doron, and backed by an impressive executive management team, including Joe Nakash, founder and chairman of Jordache Enterprises; Yedidya Ya’ari, company chairman and former president and CEO of Israel’s Rafael Armament Development Authority; Malcolm Hoenlein, CEO and executive vice chairman of the Conference of Presidents; and other distinguished individuals, MayMaan’s disruptive technology plans to revolutionize the world of transportation, from passenger cars, to trucks, locomotives and even ships.

Eitan Shmueli, company president, explains that “the whole thing started when my father was a boy living in Israel. He didn’t see an end to the wars, and he figured out at a very young age that if dependence on oil could be eliminated or reduced, that these problems could be solved.” Adds Shmueli on a more humorous note, “At the same time, there was an oil embargo, and my father didn’t have money to fuel his motorcycle.”

Yehuda Shmueli read and thought of ways to solve the problem, says son Eitan, and considered the possibility of somehow harnessing the power of water by utilizing its hydrogen components. The family eventually moved to the United States, where they established a successful printing business. At that point, Yehuda decided to return to his passion, that of developing new technology to harness hydrogen, and he began to experiment.

Yehuda, who studied at the Technion and was once the chief inspector for the IDF’s jeep production, succeeded in developing a fuel composed of 70% water and 30% ethanol, together with an engine to run it. The water mixture is converted into a clean-burning fuel, which powers the engine, and which produces a very high torque, enabling efficient and powerful performance.

The Nakash brothers, prominent businessmen and the founders of Jordache Enterprises, who, says Eitan, “have the same passion that we do for developing alternate energy,” joined with the Shmueli family and invested in MayMaan to help develop Yehuda’s vision from a proof of concept into an actual finished product.

The first target for MayMaan’s revolutionary technology, says Doron Shmueli, the company’s vice president, is diesel engines. “They are the prime target for our technology – they are everywhere.” He explains that none of today’s technological solutions, such as electric-powered engines, can replace the diesel engines used in trucks, generators and heavy equipment. At the same time, diesel engines are notorious for the pollutants that they release into the air. MayMaan is in the final stages of development of a diesel generator that works with a specially designed custom engine. Doron says that the generator will be in production within the next year and will be sold as a back-up generator for mid-sized businesses, and as a generator for remote locations around the world, to help supplement electrical production. MayMaan’s technology, says Doron, is fully developed, and its intellectual property (IP) is protected with numerous patents.

MAYMAAN’S TECHNOLOGY is “green” and environmentally friendly. Unlike diesel and gasoline engines, MayMaan’s technology eliminates emission of virtually all sulfur oxides (SOx) and nitrogen oxides (NOx). Eitan explains that one of the main challenges of alternative fuel is the high cost of infrastructure needed for fueling and producing a new device. This is one of MayMaan’s strengths, as it uses the proven and popular internal combustion engine, and its liquid fuel can be pumped just like traditional fuels. Best of all, it costs far less to run than any other energy solution, including fossil fuels.

Ya’ari, former head of Rafael, is impressed with the technology developed by the Shmueli family. “For many years,” says Ya’ari, “I have been involved in the development of various energy solutions, primarily as part of my job as the head of Rafael. Despite the progress and development that has been made in the area of electricity, I am convinced that the internal combustion engine can still make a vital contribution. The clean technology that MayMaan has developed is a clear proof of the advantages that can be developed when we find a new and innovative way to counter its disadvantages. Without a doubt, this is the simplest and cheapest way to replace diesel engines.”

Eitan explains that the company name MayMaan comes from the Hebrew word for hydrogen, one of the main components of the fuel. He also credits a second meaning to his more religiously observant brother Doron, who suggested that the name is a combination of the Hebrew word for water and the Biblical manna, which the Jews ate in their desert wanderings before coming to the Land of Israel. In that sense, he explains, MayMaan is like the water from the Biblical manna.

MayMaan’s potential, explains Doron Shmueli, extends beyond the financial significance of replacing gasoline with water and ethanol. “It is geopolitical. There is a huge advantage to taking away the importance of fuel from terror-sponsoring countries. Countries like China vote against us in the UN because they are blackmailed by those countries.”

Eitan predicts that their water and ethanol-based fuel technology will eventually trickle down to passenger cars, but that it will take time, due to the conservative nature of the auto industry, which is currently embracing electric technology.

MayMaan is the brainchild of Yehuda Shmueli, 81

When Yehuda showed his revolutionary technology to Nakash, he advised him not to publicize the product, but remain in “stealth mode,” until the product was fully developed. “We have stayed under the radar for the past six years, but we decided that this is the right time to expose ourselves and talk to people and let the world know that such a solution exists,” says Yehuda.

MayMaan is seeking additional partners to make its impact on the world. Doron and Eitan Shmueli thinks that it’s just a matter of time until MayMaan joins the ranks of successful garage-based start-ups.

This article was written in cooperation with MayMaan.