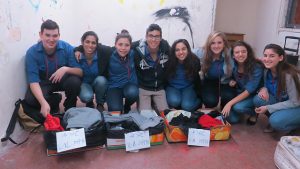 The harsh winter has been made all the more unbearable for millions of Syrians as a devastating civil war enters its seventh year.

Across the border, Israel is doing all it can without getting too mired in a neighboring state that still officially considers the Jewish state its sworn enemy.

Enemies or not, a growing number of Israelis are determined to engage in private aid missions to augment the medical care being provided by the government and the Israeli army to those Syrians who can reach the border.

One of those missions has been to collect mountains of winter gear and apparel to help Syrians “weather” the cold season.

The coats and other goods have to have all tags bearing Hebrew removed so as to not cause a problem for recipients.

To date, more than 3,000 boxes of coats, gloves, boots, sleeping bags and other winter supplies have been gathered and quietly taken into Syria for distribution.

The effort is yet further evidence of Israel’s true nature, even towards her sworn enemies.