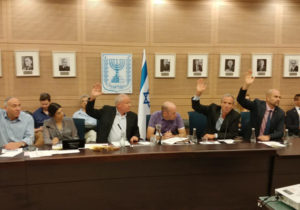 Israel’s Knesset Foreign Affairs and Defense Committee votes on a bill meant to discourage Abbas’ Palestinian Authority from continuing to reward terrorists with pensions.
– Defense Committee chairman Avi Dichter, “Israel will no longer be a pipeline for transferring money to terrorists.”

A bill meant to discourage the Palestinian Authority from continuing to pay terrorists can go to a final vote, after the Knesset Foreign Affairs and Defense Committee authorized it on Monday.

The legislation requires the government to deduct the amount that the Palestinian Authority pays terrorists from the taxes and tariffs Israel collects for the PA, and is backed by MKs from the coalition and much of the opposition.

The PA paid terrorists over a billion shekels ($280 million) in 2017, upping the amount to over NIS 1.4 billion ($390 million) in its 2018 budget, according to a Defense Ministry report based on the PA’s budget.

Prime Minister Benjamin Netanyahu praised the bill’s passage, and said it will be used to pay damages for fields destroyed by Gazans launching incendiary kites into Israel. “Justice should be done here. Whoever burns fields should know it has a price.”

“This bill fixes a historic injustice,” according to Yesh Atid MK Elazar Stern, who proposed the legislation. “This is a bill that will reduce terrorism.”

The committee voted for Stern’s version of the bill, which mandates the deduction with no options for flexibility, as opposed to the Defense Ministry’s draft, which sought to allow the government to decide each year how much the deduction should be – or whether to make the deduction at all – based on diplomatic and other considerations.

The amount deducted will be invested in a fund to pay damages to victims of terror, among other things.

Foreign Affairs and Defense Committee chairman Avi Dichter (Likud) said that the panel made history. “Israel will no longer be a pipeline for transferring money to terrorists.”

EXAMPLE: Married Israeli terrorist from Jerusalem with 4 kids, convicted of murder will receive a lifetime pension of $3,150 per/month or $37,800 a year.

The average income of a working Palestinian in the West Bank is $580 (about NIS 2,100) per month, according to the Defense Ministry, which is what the PA pays terrorists who are sentenced to three to five years in prison. Terrorists sentenced to 20 years or more – those who committed more severe crimes, and likely were involved in killing Israelis – receive five times that amount each month, for the rest of their lives.

Terrorists who are Israeli citizens receive a $145 bonus which, when added to the amount the PA pays for the most severe crimes, comes to over $3,000 a month, more than the average Israeli income of around $2,700. There are also increases in pay for being married and for each child a terrorist has.

If terrorists are released from prison early or die in prison, they or their families continue to receive a monthly salary – without a time limit.

Omar al-Abed murdered Yosef Salomon and two of his adult children, Elad and Chaya, and wounded Yosef’s wife, Tovah, when they were celebrating the birth of a grandson in their home in 2017. Elad’s wife hid their children in a nearby room of the house, where they heard the massacre taking place. Abed was given four life sentences.

Much of Monday’s committee meeting was dedicated to discussing the flexibility the government sought to keep in the bill.

“I’ve never heard of a situation where you pass a law and, in special circumstances, the government can decide to cancel it forever,” Dichter said.

Bayit Yehudi MK Shul Muallem Refaeli said that whoever opposes terrorism should oppose funneling money to terrorists. “There are some things you can’t do halfway. There should be no flexibility.”

Maurice Hirsch, former head of the IDF Prosecution for Judea and Samaria and current head of Legal Strategies for Palestinian Media Watch, suggested that, if flexibility is necessary in order for the law it pass, any freezing of the deductions should require approval from the Foreign Affairs and Defense Committee.

In the end, the committee opted for allowing no flexibility at all in the draft that is going for a final vote.