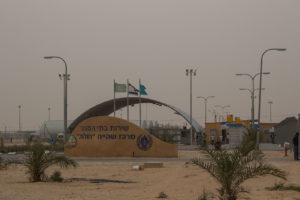 By Itsik Saban and Yori Yalon

Not one migrant entered Israel illegally in 2017, according to figures from the Border Crossings, Population and Immigration Administration. The figures mark a turning point in the fight against illegal immigration in the country.

According to the administration’s figures, 4,012 illegal residents – 3,332 of them citizens of African countries – voluntarily left Israel in 2017.

The move will leave illegal migrants in Israel with only two options: voluntary departure or indefinite detention in a prison elsewhere. To start the process, the immigration administration will issue an announcement to the migrant population in Israel to inform them of the option of leaving the country voluntarily.

The cabinet will convene a special meeting on the matter Wednesday and ministers will bring their decision before the government for approval.

“We are currently in the midst of launching a large operation to deport illegal migrants to a third-party country,” Deri said.

“The Holot detention center will be closed.”

Deri emphasized that his aim is to prioritize helping Israelis in need before helping those from other countries.

“The issue of illegal migrants residing in Israel is a burning topic, and this is an opportunity to fulfill my promises to the residents of south Tel Aviv and restore tranquility and security,” Deri said, referring to complaints of crime and neglect in south Tel Aviv, where much of the African migrant population lives.

Erdan said, “We are shutting down Holot to send illegal migrants a clear message: The State of Israel is determined to give the residents of south Tel Aviv their normal lives back and remove the tens of thousands of illegal migrants who have settled across the country.”

The Holot detention center was established by the government in 2013 to house illegal migrants from Africa, chiefly from Eritrea and Sudan. It is run by the Israel Prisons Service and illegal migrants living there receive a monthly stipend of 500 shekels ($144) each. They are permitted to leave the premises but are required to sign in three times a day. It has been the focus of a legal and constitutional storm since its establishment.