Mortar Warning Alarms will be installed in 3-6 months giving Israeli residents near Gaza border a 5 second warning to take cover.

Israel will install an alarm system to detect incoming mortar fire in southern border communities which border Gaza within the next three to six months reported Israel’s Channel 10 news on Sunday, 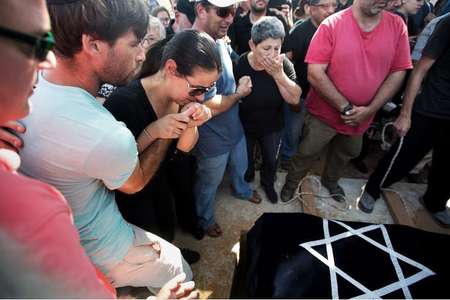 Israelis Gila (2nd left) and Doron (left) Tragerman mourn over the coffin of their son Daniel during his funeral in the Israeli village of Yevul located near the border with Gaza Strip on August 24, 2014 – Photo: Menahem Kahana (AFP)

The alarm, which will not be able to intercept incoming shells, will give residents a five second warning to find shelter.

Israel’s Iron Dome system was able to intercept numerous longer-range rockets during this past summer’s 50-day conflict between Israel and Hamas militants in Gaza.

During Operation Protective Edge mortar shells caused the most deaths, with 10 soldiers in one week, a number of Israeli civilians as well as Thai worker.

Four-year-old Daniel Tragerman was the youngest victim of the conflict after a mortar landed outside his home in kibbutz Nahal Oz on August 22nd.

Daniel, who was playing in a tent outside the family home, was killed by the impact of the mortar. His family said that they had only three seconds before they heard the siren and the blast.

“The siren startled all of us, it all happened so fast. You straight away know that this time it was not near the border fence or in open spaces, but on the other side of the wall,” said his father,Doron, at the funeral.

During the war, 70% of Israelis living in towns bordering the Gaza Strip abandoned their homes due to ongoing rocket and mortar attacks coming from the Hamas-ruled enclave.