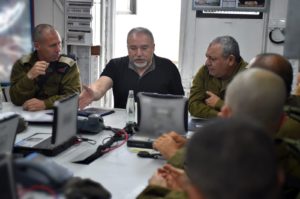 However, in an interview with (Israel’s) Kan TV on Sunday, Liberman said Israel does not negotiate directly with a group that openly seeks its destruction.

“We are not speaking with Hamas, but we will not tell Egypt or the United Nations that we do not want to speak with them. We have to be smart,” the defense minister said.

Later on Sunday, Liberman said in a Facebook post that the goal of Israel is to remove Hamas from power.

“Since the withdrawal (from Gaza in 2005) the Israeli public has been asking itself and the security cabinet a single question — what will be with the Gaza Strip in the end. Is there a solution? What is our endgame for the Gaza Strip — an area of some 365 square kilometers (140 square miles) with about two million inhabitants, one of the most overcrowded places in the world.”

The goal is to “remove the Hamas terror group from power, or force it to change its approach, i.e., recognize Israel’s right to exist and accept the principle of rebuilding in exchange for demilitarization,” Liberman concluded.

The defense minister also commented on the people of Gaza and the condition of the enclave.

“They will never be Zionists, but they would prefer the benefits of economic cooperation and a better standard of living in the Gaza Strip to non-stop confrontation, which results in the continued suffering of the majority of the population of Gaza,” Liberman wrote.

For months, both the United Nations and Egypt have been mediating between Hamas and Israel in order to bring to violence along the Gaza border and also ease conditions in the impoverished Palestinian coastal enclave.

On Sunday, the London-based Al-Hayat daily newspaper reported that Abbas’s rejection of an Egyptian-mediated peace deal between Israel and Hamas to end the recent surge in violence is creating friction between Cairo and Ramallah.

Relations between the PA and Egypt are said to be “very tense”, the report claimed citing Palestinian sources.

Liberman commented on Abbas’ rejection of the ceasefire, telling Kan that the Palestinian President “wants to damage the ties between us and the Gaza Strip. It is not our fight. They are trying to drag us into their internal Palestinian squabbles.”

Abbas apparently insists that Egyptian efforts prioritize intra-Palestinian reconciliation between his Fatah party and its rival Hamas, ahead of any ceasefire agreement with Israel, which he would eventually seek to play a central role in. He is endeavoring to oversee the terms of the deal as Fatah did following the Israel-Hamas war in the summer of 2014.

The Palestinian President has repeatedly rejected any plan for Gaza in which Hamas’ armed faction was left intact arguing that it would legitimize the group’s rival administration and weaken the status of the PA among Palestinians. In turn, he claims, it could the stage for a future Hamas political takeover of the West Bank.