September 16th 2014 was a big day for the Christian community in Israel: The Ministry of the Interior recognized “Aramean” as a nationality. Since then, about 20,000 Israeli Christians of Aramean descent going back to the time of the Bible and early Christianity, are entitled to be registered as having “Aramean” rather than “Arab” nationality. A new nation was born, or rather resurrected.

The decision, having obvious political implications, has triggered a chain reaction. The former Minister of Interior, Gideon Sa’ar, was crowned the Father of the Aramean Nation, a sort of “Herzl of the Arameans.” Well, almost. His glory now spreads beyond the borders of Israel to all Maronite and Orthodox Aramean communities across the globe thanks the historic injustice he made right just before he decided to take time off from politics. Israeli Prime Minister Benjamin Netanyahu also deserves some credit. In a February meeting with Christians, promoting steps meant to disassociate themselves from the Muslim-Arab society, the premier showed the small delegation a picture hanging on his office wall, depicting an ancient inscription on a stone recovered in archaeological digs. The Aramaic inscription reads “Netanyahu.”

However, as Netanyahu knows all too well, the very recognition of this new nationality, as well as other steps encouraging a division within Arab society, are potentially risky. The Arab community in Israel, of which the Christians make up only nine percent, is furious. Not only with the Christians involved in the bold move, but even more so with the Israeli authorities. Arab officials and social activists see this recognition as another blunt attempt to “divide and rule” the Arab minority in Israel. Presenting one united front against the Israeli-Jewish establishment by sweeping under the rug existing tensions between Muslims and Christians has always been part of the careful strategy of the Israeli-Arab communities and the Palestinian Authority.

Recently, these attempts have become increasingly difficult. Christians across the Middle East are facing annihilation by a rising fanatic Islam. From burning down churches to mass murder, the Islamic threat has a far reaching impact on the fine, fragile texture of relations within the Arab community in Israel.

But not only to the streets. The relatively new “Israeli Recruiting Forum,” which promotes military service among Israel’s Arab-Christian community, is adding more tension between Muslims and Christians. Military service in Israel means not only identification with the Jewish state, but is accompanied by a whole series of benefits to the veterans. Arabs are exempt from service and thereby deprived of those benefits. The active campaign, encouraging Christians to serve in the army, and the overtly enthusiastic response of the authorities and parts in the Israeli Jewish society, angers the Arab community. 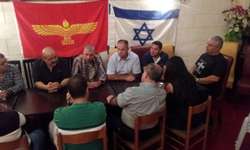 Even without this tension, most Israelis differentiate between Christian and Muslim Arabs, certainly favoring the Christians. The difference is reflected even in the linguistic definition of Christians, being dubbed as “Light Arabs.” It is meant as a compliment but all Muslims and many Christians hate it. In the existing inflammatory atmosphere and inter-religious tensions, rocking the boat even more may prove to be fatal to all parties involved. Granting special status to the Aramaic language at a time when a new law proposes to revoke the status of Arabic as Israel’s second official language, is certainly a recipe for more trouble to come.

“It’s nothing new,” said Shadi Khalloul of the village of Gush Halav in northern Israel, who has been a driving force behind both the recruitment initiative and the call for recognition of Aramean as a nationality.

“The struggle for recognition of our unique nationality and language began six years ago, but the current circumstances put a spotlight on it.”

A Maronite Christian of origin, Khalloul asked to be described in this article as “Captain (res). Aram Shadi Khalloul, head of the Christian Aramaic Association in Israel.” This, he said, best captures his identity, including his military service as a proud paratrooper. However since Khalloul became the face of the recruitment and nationality project, his reward was online death threats.

“Look at what the ‘democratic Arabs’ publish,” he pointed out. “The Arabs are a racist nation. For years Christians in this region lived in fear of the Arabs. Their silence is the ‘protection money’ they pay to Islam. We are not the ‘traitors’ in Christian society. The real traitors are those Christians who cooperate with the likes of Syria’s President Bashar al-Assad and the Palestinian Authority. They collaborate with those who are out to kill them rather than cooperate with Israel,” that protects them.

Khalloul has a list of 250 families asking to have their nationality changed and is convinced that thousands will follow. He means business. Next on the agenda is ensuring political representation of the Aramean community in the Israeli Parliament. It’s safe to presume Khalloul sees himself as that representative. 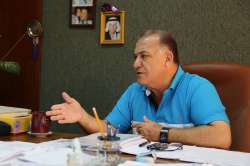 In his small office in a picturesque neighborhood of Nazareth not far from the well, where according to tradition Mary was foretold the future birth of her son Jesus, Ali Salam, the Muslim mayor of the city, does not seem to be concerned. The story of Nazareth is the history of Christians in the Holy Land in a nutshell. Once the bedrock of Christianity and a Christian city, Nazareth is now predominantly Muslim.

Being the mayor of Nazareth is a tough job. It requires skills to mediate between the Jewish establishment, which is intimidated by the Arabs’ growing population, and the inner tensions between Muslims and Christians. Salam’s tactic is to minimize them, or at least to say so.

“OK. So there is a movement for the recruitment of Christian boys,” he said. “So what? Muslims were first to join the Israeli Army. The Druze, the Bedouins. The media is getting crazy over nothing. Recently it was about the Islamic State in Nazareth. Really? It’s the same thing with the Aramean nationality. Trust me, there will be no Aramean school and no citizens holding Aramean nationality. The Ministry of Interior can give its blessing, but it won’t happen. For over 65 years Christian have been Arabs here and suddenly they are not? It’s a futile political game.”

Salam asks of Netanyahu to play fair. “He should care about all his citizens and work for our collective well-being. Why does he interfere in the business of the Christians? When he meets with a Christian community’s delegation, which represents mainly its own participants, he causes real damage. This kind of ‘divide and rule’ won’t work. We the Arabs, Muslims and Christians, share a common history and common traditions.”

Only once throughout our lengthy conversation Salam expresses any anger. “Shame on this government,” he lamented. “They cannot decide yet on who is a Jew, but pretend to know who is an Aramean. It’s ridiculous.”

Lily Galili is a feature writer, analyst of Israeli society and expert on immigration from the former Soviet Union. She is the co-author of “The Million that Changed the Middle East.”