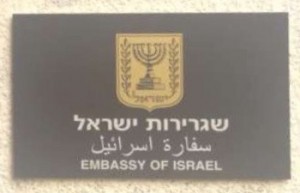 The Israeli delegation led by Director General of the Foreign Ministry, Dr. Dore Gold, arrived in Cairo today to mark event. The ceremony was attended by Egyptian officials, the US Ambassador to Egypt, as well as employees of the Israeli embassy headed by Ambassador Haim Koren.

After the Israeli flag raising ceremony and speeches by senior officials, the embassy plaque was unveiled. The event ended with the singing of the national anthems of both Israel and Egypt.

Foreign Ministry Director General Dr. Dore Gold said, “Under the leadership of Prime Minister Benjamin Netanyahu and Egyptian President Abdel Fattah El-Sisi, we were able to ward off the threats and we are working together for the sake of stability and prosperity in the Middle East. Egypt will always be a great state and the most important in the region.”

One senior Israeli official said, “The fact that the Israeli flag is back in Cairo is a positive and significant step, following Cairo’s appointment of an ambassador to Israel in June, as part of ongoing ties with Sisi. What we are seeing is normalization.”

“I welcome the re-opening of the embassy in Egypt. There are common interests between Israel and the Egyptians, especially when regional changes and tensions reinforce chances to strengthen ties with countries in the region. I am sure that the new embassy headed by Haim Koren will tighten the relationship between our states and I wish them great success in this important task,” said Vice Foreign Minister Tzipi Hotovely.

Co-chair of Israel’s Zionist Union party Zipi Livni responded to the opening of the embassy saying, “I welcome the reopening of the embassy in Egypt. Relations with Egypt are important strategically in front of what is happening in the region. Now Israel must initiate new regional alliances with moderate Arab countries, to jointly deal with new threats in the region after Iran has grown and become a nuclear threshold state, supporting and sponsoring the terrorism of the Islamic State and Hamas”.

Egypt and Israel signed a peace treaty in 1979.