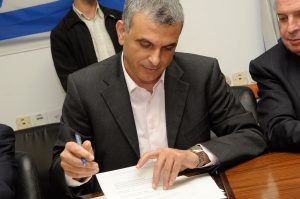 The plan, a joint project of the National Economic Council, the National Zoning and Planning Committee, and the Housing Forum, the executive arm of the Housing Cabinet, has been described as an “unprecedented strategic blueprint” in the government’s efforts to meet market demands and fight soaring housing prices.

Archive photo of a construction project in the East Jerusalem neighborhood of Har Homa. Photo AP

It calls for the planning and marketing of 2.6 million apartments in the next 24 years, to offset demand. According to projections, the number of households in Israel is expected to increase by 247%, from 2.3 million to 3.8 million, by 2040.

According to the plan, 19,500 apartments will be built for the ultra-Orthodox sector, 10,000 of which Interior Minister Aryeh Deri has agreed to construct in a new haredi neighborhood to be established near the southern town of Kiryat Gat. The plan also includes the construction of tens of thousands of apartments for the Arab sector.