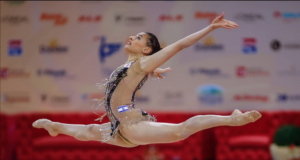 Out-performing Belarusian rhythmic gymnast Alina Aliaksandraŭna Harnasko and Bulgarian gymnast Brianna Klein, Israel’s Linoy Ashram made it to 1st place in the multi-sport race category with an incredible score of 98.45.

Ashram won the multi-sport race category on Saturday with an impressive 98.45 score, guaranteeing a gold medal. The category includes a continuous series of stages that require athletes to switch from one athletic discipline to another.

And Ashram did not stop there. On the following day, she managed to win another gold medal in the ball event with a 26.5 score, beating Belarusian rhythmic gymnast Alina Aliaksandraŭna Harnasko (25.85) and Bulgarian gymnast Brianna Klein (25.5).

The promising gymnast, one of Israel’s best hopes for a medal in this year’s Summer Olympics, also managed to win a bronze medal in the hoop event with a score of 26.1.

“This is the first international competition that Linoy competed in this season,” a statement by Israel’s Gymnastics Federation read. “Linoy presented new exercises with high levels of difficulty, and we are proud of her for achieving such an excellent score, which is undoubtedly the result of the hard work put in by Linoy and her trainer, Ayelet Zussman.”

Ashram’s journey was not an easy one, and included several attempts in the past to make it to the world stage among the world’s top gymnasts. In 2019, she came close when she managed to win the silver medal in the hoop maneuver and a bronze in the ball maneuver at the 2019 World Championship in Baku, Azerbaijan.

And in November last year, she got one step closer, when she won a gold medal in the all around competition at the European Championships in Kiev, Ukraine, becoming the first Israeli European all-around champion.

The 21-year-old from Rishon Lezion continues to prove that she is one of the most promising gymnasts in the world today, with a bright future ahead of her. She will try to maintain her training and excellent fitness ahead of the Summer Olympics in Tokyo, scheduled to begin in July.