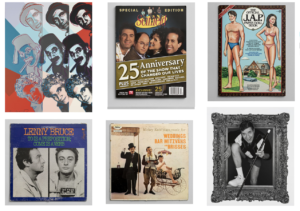 A new exhibit at the Beit Hatfutsot Museum of the Jewish People in Tel Aviv explores Jewish humor throughout history and across the world.

The “Let There Be Laughter – Jewish Humor Around the World” exhibit, which launched over the weekend, includes film clips, stand-up performances, collectors’ items, posters, photographs and more.

According to the museum’s website, the exhibit “celebrates the diversity and vitality of Jewish humor and explores how elements of Jewish joking have remained constant regardless of time, place, and language.”

Comical figures presented at the exhibit include the Wise Men of Chelm, a real Polish town, which according to Jewish folklore was inhabited by fools, the Marx Brothers, Woody Allen, Jerry Seinfeld and iconic Israeli comedian Shaike Ophir.

The center of the exhibit is designed to look like a New York City comedy club. On the model stage, an original film is screened, showing leading Israeli comedians such as Adi Ashkenazi, Orna Banai and Eli Yatzpan sharing some of their funny childhood experiences.

According to the museum’s chief curator, Dr. Orit Shacham Guber, the decision to focus on humor “stemmed from the desire to present Jewish culture at the museum. Humor is, of course, a significant part of the culture, especially among Jews. Today, it is difficult to understand what Jews are without relating to their humor.

“We didn’t want to do the usual museum exhibit, where they show you records, posters and research and explain what humor is,” she said, “but to enable visitors to experience that humor and laugh.