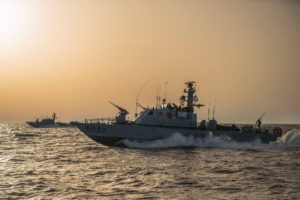 The Israeli navy intercepted a Swedish-flagged boat aiming to reach Gaza, the IDF said on Saturday.

“The ship was monitored and was intercepted in accordance with international law,” an IDF spokesperson said. “It was brought to the Ashdod base.”

“The incident ended with no unusual events.”

Twelve people were aboard the “Freedom for Gaza.” They were taken for further inquiry, and the IDF explained that the flotilla was in violation of Israel’s legal maritime barrier.

According to the organizers, the flotilla was carrying medical supplies and was intercepted in international waters.

“Any humanitarian merchandise can be transferred to Gaza through the Port of Ashdod,” the IDF said.

The IDF will continue to enforce and protect the maritime borders of the State of Israel and its citizens,” the IDF statement concluded.

Four boats left from Scandinavia in mid-May and stopped in some 28 ports along the way, with two remaining behind after a recent stop in the Italian port of Palermo.

On Sunday, the Israeli navy intercepted the first boat, which contained “just a few boxes” of medical supplies.