Israel’s ‘no longer kept secret’ flightpath to the Arabian Gulf 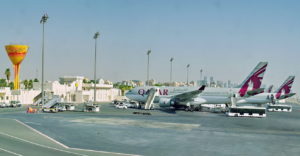 According to ‘Aviation Bridge’ CEO, the private Israeli airline has recently begun advertising its executive jet flight services from Israel to Qatar, Saudi Arabia, and the UAE.

Business and privet jets flying from Israel’s Ben-Gurion Airport to the United Arab Emirates are a fairly regular occurrence, although such flights have been usually kept under wraps. But now that the two countries have begun to cement their relationship, such flights are no longer kept secret.

This is the case with private Israeli airline “Aviation Bridge,” which has recently begun advertising flights to the Persian Gulf States on their website, including Riyadh in Saudi Arabia, Qatar, Dubai and Abu Dhabi.

A flight from Israel to Dubai showing no departure or landing data – Photo: Flightradar24

According to Aviation Bridge’s website, “This service is unique and challenging for us, and gives the company’s customers a unique alternative to finding solutions suitable for their business needs, or a solution for families interested in enjoying the uniqueness of the Persian Gulf region.”

Since there are no diplomatic ties between Israel and the Gulf states – including no aviation agreements – only the company’s aircraft that have foreign registration can actually fly from Israel to the Persian Gulf and Saudi Arabia, via a third country from which it is possible to continue to the destination with a new flight permit.

Most of the planes that take off for the Gulf from Ben-Gurion make a stopover of just few minutes in Jordan, Egypt or Cyprus.

“Because of privacy concerns and the privacy of our customers, it is not possible to specify the identity of our passengers,” says Aviation Bridge’s CEO Nir Bronstein.

“Our relationship with the Gulf is a very warm one, and Israelis have been in Dubai and Abu Dhabi for years, they are treated very well.”

It should be noted that Israelis cannot simply enter the Persian Gulf principalities unless they have a foreign passport, or a special visa issued to businessmen.

Also, due to the coronavirus pandemic, those returning from these principalities are obliged to enter a two-week isolation.