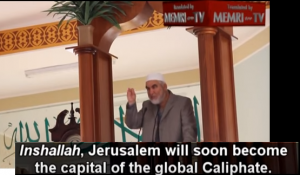 The Diplomatic-Security Cabinet’s unanimous decision on Tuesday to outlaw the Islamic Movement’s Northern Branch was widely praised by most Knesset members, although Israeli Arab politicians were critical of the move.

Defense Minister Moshe Ya’alon (Likud) said, “[The Northern Branch] endangers the security of the State of Israel and, according to information we’ve gathered, collaborates with Palestinian terrorist organizations, including Hamas, with the aim of inflaming the area and spurring on violence.”

Education Minister and Habayit Hayehudi leader Naftali Bennett said, “Israel is moving from words into actions. We are demolishing the homes of terrorists, stripping residency rights and this morning we outlawed the Islamic Movement’s Northern Branch. … Israel is leading the free world’s global fight against Islamic radicalism … Terrorism must be destroyed with a heavy hand. We will win.”

Justice Minister Ayelet Shaked (Habayit Heyehudi) called the move “a necessary step given the fact that [the Northern Branch] undermines the existence of Israel as a Jewish and democratic state. We are ready to invest in Arab society, but we will not tolerate groups that incite against Israel.”

Raed Salah: Jerusalem Will Be the Capital of the Global Calipheat

Opposition Leader MK Isaac Herzog (Zionist Union) also praised the move, saying, “This is the first step in protecting democracy in Israel. Lehava [an extreme right-wing anti-assimilation group] must also be outlawed. Our democracy is under attack from both the Right and the Left.”

Joint Arab List leader Ayman Odeh, on the other hand, slammed the decision, saying, “[Prime Minister Benjamin] Netanyahu is inciting against the Arab public and trying to inflame the area. Netanyahu wants to turn the conflict into a religious one.

Joint Arab List MK Basel Ghattas called for the outlawing of Zionism and a boycott of Israel. Ghattas described the outlawing of the Northern Branch as a “fascist move of the highest level.”

Meanwhile, after an emergency meeting of the High Follow-Up Committee for Arab Citizens of Israel, committee leader Mohammad Barakeh, a former MK, announced a general strike would be held on Thursday in the Arab sector to protest the move.