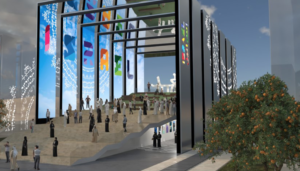 Foreign affairs expert say, while obviously still concerned about the Palestinian issue, Israel’s invitation to participate at the 2020 trade fair in Dubai is demonstrative in being accepted as an integral, strategic player in the mid-East.

With the world’s largest trade fair opening in an Arab country for the first time next year, Israel is stepping up preparations, hoping to boost nascent ties with regional neighbors.

The Dubai Expo 2020 trade fair will gather nearly 200 countries vying for the attention of a projected 25 million visitors over nearly six months from October.

Like most Arab countries, the United Arab Emirates has no diplomatic relations with Israel.

But the Jewish state has been quietly moving closer to Gulf Arab countries on the basis of shared security interests and a common enemy — Iran.

An Israeli pavilion at an Arab-hosted expo presents a unique opportunity to speed up the “normalization” of relations and reach out to Arab peoples, officials say.

“To us, the added value is in the Arab and Muslim visitor,” said Elazar Cohen, the Israeli foreign ministry’s point man for the expo, which is organized by the Paris-based Bureau International des Expositions (BIE).

So far public overtures between Israel and Arab nations have been cautious, but notable, with Israeli athletes and officials increasingly allowed into Gulf countries.

The expo is “a unique meeting between cultures and languages and people who don’t routinely meet”, said David Knafo, the Tel Aviv-based architect behind the design of Israel’s pavilion.

‘No walls, no borders’

Designed to reflect Israel’s sense of belonging to the region as well as the openness the Jewish state seeks to broadcast to its Arab neighbors, “the pavilion is, therefore, an open space -– a living room to host the expo visitors.”

Concept videos of the pavilion reveal stairs leading up a representation of a sand dune.

LED screens cover the walls of Israel’s pavilion for the 2020 Expo in Dubai – Illustration: Courtesy of AVS

Described as a “pavilion with no walls and no borders,” the stairs are arched by large LED screens showing images of different aspects of Israeli society.

The aim, Knafo said, is to symbolize Israel’s transformation of its deserts through culture and technology, hinting at the possibility that other desert lands could do the same.

An auditorium below the pavilion will offer visitors an interactive multimedia experience, the Foreign Ministry’s director-general Yuval Rotem said.

It aims to showcase “the Israeli spirit and culture” in innovations and developments from fields such as water, medicine, and information technology, he said.

Portal to the Arab world

Prime Minister Benjamin Netanyahu has described the Israeli expo pavilion as part of “the continued progress of normalization with the Arab states”.

Past Israeli leaders saw peace with the Palestinians as the gateway to ties with the broader Arab and Muslim world.

But with the peace process frozen for years now, Netanyahu argues instead that building relations with Arab countries will push the Palestinians toward a peace deal with Israel.

The Israeli presence in Dubai “will create a buzz”, said Cohen, noting that the lack of a peace agreement, or even process, with the Palestinians is still liable to draw the attention of at least some Arab visitors at the expo.

The pavilion’s display won’t touch on politics, he added, instead “focusing on what Israel has to offer”.

Dore Gold, former director-general of the Foreign Ministry, said the “quasi-diplomatic presence” of the pavilion is one of several developments with “a cumulative effect”.

Dr. Anwar Eshki (left), a retired general in the Saudi military, and Israeli diplomat Dore Gold (right) working to close the gap between their two countries at the Washington-based Council on Foreign Relations think tank.

He cited sporting competitions and the 2015 opening in Abu Dhabi of an Israeli mission to the International Renewable Energy Agency, which is based there.

“It’s not normalization, but it’s an enhanced presence,” he said.

While the Gulf Arab states have not lost interest in the Palestinian issue, “these countries are looking after themselves”, Dore said, including enhancing security cooperation with Israel against Iran.

Gold, who heads the Jerusalem Center for Public Affairs think-tank, said the expo was part of attempts to slowly publicize aspects of relations in the region not pertaining to security.

“The name of the game is how to find joint interests that don’t create a big stir,” he said.

“In any case, if you did public opinion surveys, you’d find that throughout most of the Gulf there’s a kind of understanding that Israel’s part of the region.”

Diplomat Cohen and architect Knafo both noted the warm welcome they have received in the Gulf state, as work on the pavilion entered advanced stages and their visits to Dubai became more frequent.

“The attitude of the hosts is excellent,” Cohen said.

“I didn’t expect anything else but when you encounter it, it’s heartwarming.”
The expo could be “a portal to a world that was blocked to us, and our pavilion is a portal to the Israeli experience at all its levels — scientific, cultural, human,” said Knafo.