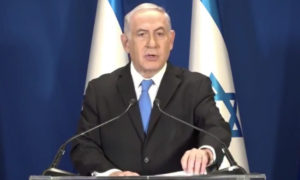 Israel’s PM Netanyahu came out Sunday and confirmed it was Israel’s Air Force that hit ‘hundreds’ of military targets belonging to the Iranian regime and its proxy, Hezbollah, after the explosions that rocked Damascus on Friday night were attributed to Israel in foreign press reports.

The prime minister said that in the past 36 hours, the IAF hit Iranian arms depots near Damascus airport. “The wave of recent attacks proves that we are determined more than ever to act against Iran in Syria,” he told the weekly cabinet meeting in Jerusalem.

Explosions over Damascus on Friday night, in an attack blamed on Israel. – Photo: Unattributed [Ynet]

Netanyahu also said that the IAF has hit “hundreds” of targets belonging to Iran and its proxy Hezbollah in Syria.

The prime minister’s statement comes after Syria’s state-run news agency SANA said the country’s air defenses intercepted missiles fired by Israeli fighter jetson Friday night. The attacks reportedly caused damage but no casualties. SANA reported that “over eight targets” exploded over the capital, adding that most of the Israeli missiles had been intercepted.

An ammunition warehouse at the Damascus airport was reportedly hit, but a Syrian Transport Ministry official said to SANA airport activity continues as normal.

“At 11:15 before midnight Israeli warplanes coming from Al-Jalil area launched many missiles towards Damascus area and our air defenses intercepted them and downed most of them,” a Syrian military source told SANA.

Syrian state media broadcast footage of what it said were the air defenses firing, with bright lights seen shooting across the night sky. Explosions were heard in one of the videos.