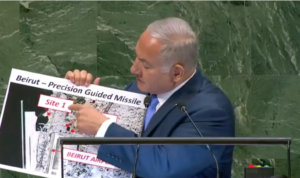 Netanyahu began his speech by revealing a “new secret nuclear” facility in Iran, holding up a map and a photograph of an outwardly innocuous looking building.

The Israeli premier said the “secret” warehouse was used for “storing massive amounts of equipment and material from Iran’s secret nuclear weapons program.”

“Iran has not abandoned its goal to develop nuclear weapons…. Rest assured that will not happen. What Iran hides, Israel will find,” he added.

Netanyahu praised US President Trump’s hard line on Iran and his decision to reimpose sanctions on Tehran.

“Iran deal supporters were wrong about what would happen if sanctions were reinstated. Let’s see what happened to Iran’s economy now that President Trump is forcing companies to do business with (either) Iran or the US,” Netanyahu said.

Iran’s economy was booming before the sanctions and now it’s in distress. “If that’s little economic impact, imagine what will happen with the next batch of US sanctions in November,” Netanyuahu stated.

Israel will continue to defend itself against Iran, “wherever, whenever” it feels threatened, Netanyahu vowed, mentioning Iraq, Syria and Lebanon as places where the Jewish state is willing to attack Iranian targets.

Earlier this month, the Israeli army admitted that it has carried out more than 200 airstrikes in Syria over the last year, many of which Israel claimed were targeting Iranian positions and weapons convoys.

Netanyahu also vowed that Iran will not succeed in achieving their goal, which he believes is to acquire nuclear weapons.

In another revealing moment, Netanyahu held up aerial photos of Hezbollah weapons stores in the Lebanese capital, saying “Israel knows what you are doing, Israel knows where you are doing it, and Israel will not let you get away with it.”

The Israeli army assesses that Hezbollah uses these sites to manufacture and store precision missiles. Netanyahu presented three of Hezbollah’s sites to the UN General Assembly: One is located near Lebanon’s International Airport, another is underneath the port of Beirut, and the third is located under a soccer field.

The Israeli Prime Minister went on to heavily criticize European Union. He asked if European leaders ‘have learned nothing from history’, saying their ‘appeasement’ policy only helps Iran achieving its goal.

“Appeasement”, Netanyahu repeated while looking at the UN General Assembly in what appeared to be a reference to British foreign policy towards Hitler before WWII broke out.

France and Britain have both expressed a willingness to uphold the 2015 nuclear deal and to find a way to do business with Iran in spite of US sanctions.

“This may surprise you but I have to admit that the Iran deal has had one positive consequence. By empowering Iran, it brought Israel and many Arab states closer together than ever before, in an intimacy and friendship that I have not seen in my lifetime, and that would have been unthinkable a few years ago,” Netanyahu said.

“Israel deeply values these new friendships, and I hope the day will soon arrive when Israel will extend a formal peace, beyond Egypt and Jordan, to other Arab nations, including the Palestinians,” he added.

Nation state law and the Palestinians

After Palestinian President Mahmoud Abbas called Israel’s nation state law “racist” and inevitably leading to an “apartheid state”, Netanyahu fired back at the Palestinian President, saying he should be careful with talking about racism since he is the one who wrote a dissertation questioning the Holocaust.

“This is downright preposterous. There are more than 50 countries that have crosses or crescents on their flags. And dozens of countries that define themselves as the nation-state of their peoples. None of these countries are libeled for celebrating their national identity,” he added.

Netanyahu slammed the UN’s bias against Israel as pure “anti-Semitism.”

“Israel airlifted Ethiopian Jews to freedom and a new life in Israel, in the Jewish state. Yet here at the UN, Israel is absurdly accused of racism. Israel’s Arab citizens have exactly the same rights as all other Israeli citizens. but here Israel is shamefully accused of apartheid. It’s the same old anti-Semitism with a brand new face. That’s all it is,” Netanyahu said.

The Israeli Prime Minister accused the Palestinian Authority of rewarding terrorism, something Abbas an hour earlier had declared was the furthest from the truth.

“The more they slay, the more you pay. and you condemn Israel’s morality? You call Israel racist? This is not the way to peace,” Netanyahu said.

“This body should not be applauding the head of a regime that pays terrorists. The UN should condemn such a despicable policy,” he concluded.