Israel’s PM tells Hamas: “We’re not going to give something [terrorists’ bodies] for nothing.” 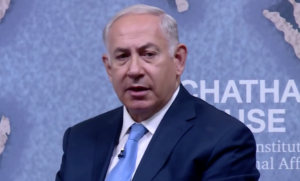 Upon Prime Minister Netanyahu’s returned to Israel after marking the 100th anniversary of the Balfour Declaration, Netanyahu reiterates his two goals for Israel, and his two major rules.
– “The second [rule] is that we’re not going to give something for nothing,” – PM Netanyahu.

Prime Minister Binyamin Netanyahu returned to Israel Monday following a trip to the UK marking the 100th anniversary since the Balfour Declaration proclaiming Great Britain’s support for the establishment of a Jewish national home in the historic Land of Israel.

The tunnel, which ran from the city of Khan Yunis in the southern Gaza Strip into Israeli territory, was destroyed as part of the IDF’s efforts to prevent terrorists from maintaining underground routes the Gaza security fence.

Twelve Hamas and Islamic Jihad terrorists operating in the tunnel at the time of the explosion were killed, with several others injured.

Despite demands by Hamas and Islamic Jihad that they be permitted to enter the tunnel to retrieve the bodies of their fellow terrorists, Israel refused, saying it would not permit any entry into the tunnel system, which extended into Israeli territory.

On Monday, Prime Minister Netanyahu declared that Israel would continue to hold the bodies of the five Islamic Jihad terrorists and would not give the terrorist organization “something for nothing”, hinting at Israel’s demand for the return of civilians and the remains of two slain soldiers held by the Hamas regime in Gaza.

“We’re not going to give something for nothing,” said Netanyahu.

The Hamas terror group has held the bodies of two slain IDF soldiers, Hadar Goldin and Oron Shaul, in captivity since 2014, demanding the release of large numbers of jailed Arab terrorists as a goodwill gesture before negotiations for the soldiers’ release even begin. Three Israeli citizens are also believed to be held by Hamas.

“The government has two major goals. The first is to protect the country, and the second is to build up the country. We’re working on both simultaneously. We’re defending our country with a simple rule – we attack whoever attacks us.”

“The second [rule] is that we’re not going to give something for nothing.”

PM Netanyahu fend off hostile questions by one of the BBC’s most prominent journalists in an openly ‘hostile interview’.
– An Interesting Watch: