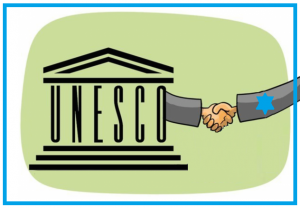 Both the United States and Israel have announced their withdrawal from the agency at the end of the year due to its “anti-Israel” bias, the US said at the time of its announcement last October.

The conference will take place within the framework of the annual UN General Assembly meeting, which is also expected to draw some major announcements from the Trump Administration regarding its potential peace proposal for Israeli-Palestinian conflict.

The keynote speaker of the event will be the Chief Historian of Jerusalem’s Yad Vashem Holocaust memorial museum, Dina Porat, leading a panel of world leaders that will include German Chancellor Angela Merkel, French President Emmanuel Macron and UN Secretary General Antonio Guterres, according to the Israeli Ynet news site.

The conference will set the stage for a new initiative in the American educational system that will seek to combat anti-Semitism.

Earlier this summer, Israel’s ambassador to UNESCO said he was urging his government to reconsider its decision to quit the UN cultural body, saying it had halted its “anti-Israeli resolutions” over the past year, which indeed earned the praise of Israel’s premier this month.

Netanyahu’s choice to attend suggests Israel and the United States may consider sticking around.

“I regret this deeply, as it is my conviction that it is inside UNESCO and not outside it that states can best seek to overcome differences in the organization’s fields of competence,” she had said.

One referred to the Jewish state as “the occupying power” in the divided city of Jerusalem. Another declared the Old City of Hebron in the occupied West Bank a Palestinian World Heritage site.

Tensions had been bubbling since UNESCO controversially admitted Palestine as a member state in 2011 — a move opposed by the US and Israel, who argue that any recognition of Palestinian statehood must await a negotiated Middle East peace deal.

The US cut funding to UNESCO over the decision, depriving it of around a fifth of its budget.

The 195-member body is best known for producing a list of World Heritage sites that have become tourist favorites.

More recently, Israel has clashed with the UNESCO over resolutions that questioned the Jewish State’s connection to the ancient holy sites the Tomb of Patriarchs in Hebron and the Temple Mount in Jerusalem.

“UNESCO has broken records of hypocrisy, incitement and lies against Israel and the Jewish people, while polluting its noble core principles with politicization and diplomatic terrorism that sometimes bordered on anti-Semitism,” said Shama-Hacohen earlier on Friday, explaining why Israel decided to follow up to Netanyahu’s first pledge to leave the organization last autumn.

UNESCO has a long relationship with Israel, which officially joined the organization in 1949 and was expelled from it in 1974 because of archaeological excavations it carried out on the Temple Mount that were not welcomed by the UN, Ynet reports.

Five years later, Israel again became a member of UNESCO after the United States threatened to stop the transfer of funds to the organization unless the Jewish state was allowed to rejoin.

In 2010, UNESCO determined that Rachel’s Tomb, in the Palestinian city of Bethlehem, was a mosque and called upon the Israeli government to remove the site along with the Tomb of the Patriarchs from its list of national heritage sites.

In October 2011, the Palestinian Authority was accepted as a full member of UNESCO by a majority of 107 countries against only 14 opposed, while 52 abstained. In light of the vote, Israel and the United States criticized UNESCO harshly, and the latter started to reconsider its contributions to it.

UNESCO also runs science, educational and cultural programs, including programs to educate people about the Holocaust and promote intercultural dialogue.