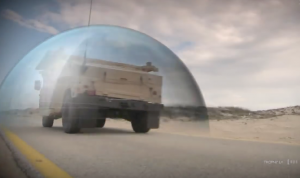 Israel’s Rafael Advanced Defense Systems is poised to debut a new version of its Trophy tank defense system at this week’s Association of the United States Army’s annual exhibition in Washington, the largest defense industry event in the world. Also known as Windbreaker, Rafael’s tank defense system has been successfully protecting Israeli tank crews against anti-tank missiles, RPGs and other threats since 2009.

The Trophy LV was developed to meet the defense needs of lighter vehicles maneuvering the battlefield, from four-wheel-drives to armored and infantry fighting vehicles.

According to Rafael’s website, the new system has been designed to counter primarily short-range threats, such as shoulder-launched rockets and grenades, and is also suited for urban warfare. The system utilizes the same operating principles of the original heavy-vehicle defense system, and can be easily adapted to a range of platforms.

In its AUSA debut, the Trophy LV will be mounted on American defense contractor Oshkosh’s four-wheel-drive (clip below), mine-resistant ambush-protected vehicle, the most advanced vehicle of its kind currently in use by the U.S. Army.

Trophy LV’s modular system combines radar and electro-optic sensors, ensuring rapid detection and assessment capabilities and 360-degree protection for the vehicle on which it is mounted, including for its windows and doors, Rafael’s website said.

According to Defense News, the demonstration will also feature Rafael’s Mini Samson, a remotely controlled weapon station that allows the vehicle’s crew to launch Spike long-range anti-tank missiles at enemy targets, without exposing themselves to enemy fire.

“Every year, we get numerous reminders that it’s almost impossible to maneuver on the battlefield without an active protection system. When militaries and peacekeeping forces are facing millions of relatively cheap weapons in the hands of terrorists and other organizations, you’d better have some kind of protection, like Trophy, if you want to survive,” Giora Katz, Rafael executive vice president and general manager of its Land and Naval Division, told Defense News.

The New American Humvee With Israeli Armor, to Serve in the IDF

Katz said Trophy LV had been tested in hundreds of scenarios. He told Defense News Rafael was negotiating potential deals with defense contractors and equipment manufacturers over both the Trophy system’s versions, as well as other defense systems.