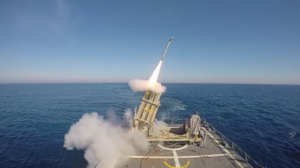 As part of the deal, Romaero will acquire the know-how and license for the production of air defense systems, including the Iron Dome, the naval iron dome, “Samson” model remote controlled weapons positions and precision “Spike” tactical missiles (also known as Gil).

Rafael is estimated to gain hundreds of millions of dollars from the deal.

This purchase comes against the backdrop of some ongoing tensions in Eastern Europe, with Romania’s leaders fixing a suspicious gaze at Russia.

The new agreement is the first time Rafael has transferred production to Romanian soil. However, this has been part of Raphael’s business policy for the past 15 years, during which similar production plans were made with over 50 companies abroad.

The promise of creating work for the citizens of the countries with which the agreements are signed is an important element in Rafael’s ability to expand its operations in the United States, Europe, South America, Asia and more.

“Rafael’s cutting-edge solutions are in use throughout the world, as well as in Romania,” said Rafael CEO, Maj. Gen. (ret.) Yoav Har-Even. “We look forward to expanding our presence here and to working with our new partners at Romaero as our strategic partner to create new avenues of cooperation with local Romanian industry and suppliers.

“This is an essential aspect of our corporate policy and strategy—a dedication to strong, win-win partnerships and long-term collaboration to establish technological advancement, local production, and capabilities.”

Romaero CEO, Remus Vulpescu, also lauded the deal and the company it was signed with, saying, “Romania’s increase in defense spending brings unprecedented opportunities for major investments in the defense industry. We are very excited to be teaming with Rafael, one of the world’s most ground-breaking defense industries.

“Together we will be able to extend our reach and sales internationally, for state-of-the-art systems produced in Romania and suitable for any platform, to fulfill Romania’s needs and requirements. We will work to provide high-quality services and competitive pricing, as well as business development through marketing performance.”