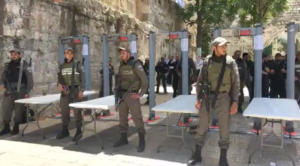 In an agreement facilitated by Jason Greenblatt, U.S. President Donald Trump’s Mid-East envoy, the Temple Mount’s magnetometers will be replaced with advanced technologies according to Monday night’s decision from Israel’s Security Cabinet, with an allocated budget of up to 100 million shekels for the sophisticated optic & thermal devices.

The Security Cabinet decided on Monday night to remove the metal detectors from the Temple Mount.

In a statement, the Cabinet said it “accepted the recommendation of all of the security bodies to incorporate security measures based on advanced technologies (“smart checks”) and other measures instead of metal detectors in order to ensure the security of visitors and worshippers in the Old City and on the Temple Mount.”

Until the implementation of the plan, the Israel Police will reinforce its units and carry out additional actions as necessary in order to ensure the security of visitors on the Mount.

The Cabinet also decided to allocate a budget of up to 100 million shekels to implement the plan (over a time frame of up to six months) including an across-the-board cut as necessary, according to the plan to be presented by the Public Security Ministry.

The cost of the plan will also include financing for police personnel positions in accordance with the recommendation of the police.

Israel placed the advanced metal detectors, known as magnetometers, at the entrance to the Temple Mount in response to the recent terror attack at the compound, in which two Druze police officers were murdered.

The security measures prompted an outcry from the Palestinian Authority (PA), the Jordanian Waqf which administers the site, and the Jordanian government. The Waqf have refused to enter the compound in protest of the new measures and have prayed in the streets outside.

The announcement of the new security measures came after Jason Greenblatt, U.S. President Donald Trump’s envoy, arrived in in Israel in a bid to ease tensions.

Greenblatt met with Prime Minister Binyamin Netanyahu along with U.S. envoy to Israel David Friedman during his visit