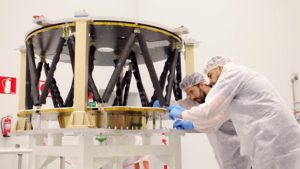 SpaceIL has undertaken to promote scientific & technological education in Israel, working with Israel Aerospace Industries that is currently assembling SpaceIL’s spacecraft to inspire the next generation in Israel to study science, engineering, technology and mathematics.

SpaceIL, the Israeli representative in the Google Lunar XPRIZE competition, is making giant strides to land the first Israeli spacecraft on the moon, after the base structure of the craft was received at IAI facilities earlier this week.

The skeleton of the spacecraft consists of two perforated “sandwich” boards, upper and lower plates and a cone ring structure.

These components, designed by an aerospace industry and manufactured in Spain by IberEspacio, complement the sub-system structure of the spacecraft to be launched to the moon during the coming year.

“We are pleased to be working with the professional team of IberEspacio, and now that we have the base structure, we can begin the assembly, integration and testing at the IAI spacecraft facility,” SpaceIL CEO Dr. Eran Friedman anounced.

The launch is expected to take place next year.

SpaceIL is a non-profit organization established in 2011 with the aim of landing the first Israeli spacecraft on the moon.

In October 2015, SpaceIL marked a dramatic milestone in the project, becoming the first group to announce a launch contract.

The organization was founded by three young engineers: Yariv Bash, Kfir Damari and Yonatan Weintraub, who responded to the global competition Google Lunar XPRIZE—a modern international race to land an unmanned spaceship on the moon.