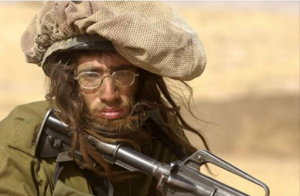 Israel’s ultra-Orthodox community is witnessing a revolt by its young as more & more haredim seek to transcend their lives of poverty & isolation by enlisting in the IDF, entering the country’s  workforce, & pursuing academic educations.

A quiet revolution is arising inside the insular world of Israel’s ultra-Orthodox Jewish community, chipping away at the walls its leaders have erected to protect against what they see as the dangers of secularism. More and more young ultra-Orthodox are insisting they can continue to lead pious lives while also embracing technology, the modern workplace and their fellow Israelis.

A class at the Hachmey Lev yeshiva high school in Jerusalem – Photo: AP

The current call for reform, however, is coming from within a community long resistant to outside pressures to change.

Some are leaving ultra-Orthodoxy entirely, with one in 10 moving on to more moderate Judaism or secular life. But others, like Avigdor Rabinovitch, a single, 25-year-old political science student at the Open University, are building a grass-roots movement that strives to transcend a life of poverty and isolation, and to redefine what it means to be an ultra-Orthodox Jew in Israel.

“It’s a new identity that I call ‘Israeli haredim,'” said Rabinovitch, who organizes events for like-minded reformers. “We’re not trying to be like anyone else. We want to be ourselves but to open up to new worlds as well. We want to be involved and not just watch from the side.”

After generations have shunned military service, more young haredim are looking to improve their future job prospects by joining combat and intelligence units that have been set up for them. According to the IDF, some 2,300 enlisted during the last draft year, up from 288 in 2007. Far more are enrolling in higher education as well.

Where only a third of haredi males had jobs as recently as 2003, the employment rate for haredi males has now passed the 50% mark, according to Gilad Malach, a researcher from the Israel Democracy Institute who specializes in the community. Haredi women have traditionally been the primary breadwinners, and their employment rates are close to 75%, he said.

“I think it is a historic change,” Malach said. “In the past, in times of crisis, the haredi world would deal with things by closing ranks and tightening the ghetto. But they realize that this just doesn’t work anymore — socially, culturally and financially.”

The haredim — Hebrew for “those who fear God” — make up about 8% of Israel’s 8.5 million residents. Many rabbis fear immersion in mainstream society will expose them to secularism and cut into prayer and study. Leaders speak proudly of centuries-old traditions of learning that they believe allowed the Jewish people to survive the Spanish Inquisition, European pogroms, the Holocaust, and other catastrophes. Yeshiva study, they say, is no less important than military strength in protecting the country from modern threats and no less valuable than advanced academic degrees.

For decades, a string of secular-led Israeli governments have maintained the status quo, either because of their dependence on ultra-Orthodox political kingmakers or out of fear of an angry backlash from a sector that has not hesitated to block roads, clash with police or send tens of thousands of activists into the streets when ordered by their rabbis. Efforts to force them into the army and workplace have generally failed.

MK Menachem Eliezer Moses (United Torah Judaism), a haredi lawmaker, said that, as individuals, ultra-Orthodox men can appeal to their rabbis for approval for military service, university studies and greater integration. But citing an ancient proverb, he said that as a rule religious study will always take precedence.

“Studying Torah is a goal unto itself,” he said. “You take an 18-year-old boy who has yet to fill himself with knowledge and transfer him to another entity — that is a problem.”

But reform advocates say such extreme exclusion is a relatively new phenomenon that has only taken hold in Israel, harming the community and pushing observant Jews away. Their brethren in the Diaspora typically work for a living and engage in commerce with non-Jews.

“According to tradition, the ultra-Orthodox worked, and we need to get back to that,” said Moshe Friedman, a co-founder of KamaTech, a nonprofit that focuses on haredi integration into Israel’s booming high-tech industry. “The grass-roots movement is ahead of the politicians on this, but they will slowly catch up.”

High-tech is one of the areas where haredim have thrived most. Their intense, methodical study of ancient religious texts has proved oddly applicable to computer programming.

Friedman, 37, has fielded more than 5,000 haredi requests for assistance and has helped launch more than 220 haredi-led startups. He comes from a long line of distinguished rabbis and was educated in the community’s most prestigious yeshivot. While some in his circle have been baffled by his career path, he said his lineage and his maintainenance of a strict haredi lifestyle have given his cause credibility.

“They know I am not out to destroy the haredi world but to help it by providing people employment,” Friedman said. “The main challenge is proving that you can do this and stay haredi. If we can show that someone can go work at Google and stay haredi, others will come.”

According to a recent survey of Israeli society, large gaps remain between the priorities of the ultra-Orthodox and others. The Pew Research Center found haredim to be far less likely than others to value career goals. Some 68% of haredim said being successful in a high-paying career was important to them, compared to roughly 90% of all other groups.

Employment, though, is a far easier sell than military service or education reform.

Draft exemptions go back to Israel’s establishment in 1948, when the government allowed several hundred gifted students to pursue exclusive religious studies to help rebuild great schools of Jewish learning destroyed in the Holocaust. As ultra-Orthodox parties became power brokers, the numbers mounted, with thousands of young religious men evading the draft to pursue seminary studies while most other Jewish men are conscripted for three years of mandatory service. The exemptions have caused widespread resentment toward the ultra-Orthodox. Those who have joined still often face harassment, derision and insults from their own community.

The current government has rolled back legislation that aimed to gradually incorporate the ultra-Orthodox into the military.

Many see education reform as the toughest hurdle. Because of their high birth rates, more than a quarter of all Israeli first-graders are haredim who study in independent school systems that focus primarily on religion while barely teaching math, science or English. The result: Graduates go on to shun the work world and collect welfare to help raise large families in poverty.

Betzalel Cohen is the haredi principal of Jerusalem’s Hachmey Lev school, one of just a handful of new yeshiva high schools that combine religious study with a secular education that prepares students for the nationwide matriculation exams. He said not all haredi youths will grow up to become rabbinic prodigies and the high percentage of dropouts from traditional yeshivot requires the community to find a proper framework that prepares them for life and the workforce.

“It’s like sending everyone to medical school and saying all we need is doctors. All you will get is too many mediocre doctors and not enough jobs for them,” he said. “I really think the future of the haredi community depends on what we are doing. … I’m the biggest threat to the establishment because I am saying ‘the emperor has no clothes’ and I’m offering an alternative.”