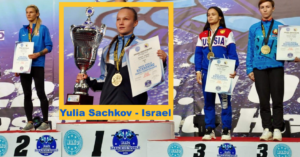 Sachkov, 21, from Haifa defeated her Czech opponent in the finals of the under-52 kilogram (114.5 pound) weight class of K-1 style kickboxing, after defeating her opponent from Belarus in the semi-finals.

“This is a dream that came true. Everything worked perfectly,” Sachkov said after her win, local media reported.

For the silver medals, 19-year-old soldier Shir Cohen from Tiberias came in second in the under-52 kilogram class for KL style kickboxing.

Daniella Pashayev, 18, also from Tiberias, won a silver medal in the LK style for the under-48 kilogram (106 pounds) class.

In the men’s competition, Or Moshe from Nahariya was the runner-up in the under-67 kilogram (148 pounds) class for K-1 style.

Local media reported that Moshe’s defeat came after an especially close battle with his Ukrainian opponent in the finals.

“This is a historic achievement for such young athletes,” head of the Israel Kickboxing Federation Hani Sachs said at the end of the tournament.

“We are working correctly and orderly, which is seen in the results. We are a very appraised team, a unified team, with excellent coaches,” she added.