Prime Minister Mario Monti on his diplomatic visit to Israel: “any threat to Israel is unacceptable,” in reference to Iran’s nuclear program. 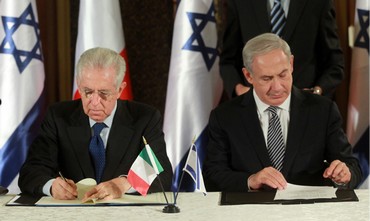 “We absolutely reject threats to regional stability and denial of the Holocaust,” Monti said in reference to Iran. “Any threat to Israel is unacceptable.”

Monti said that the sanctions against Iran were effective and undoubtedly had an influence in disrupting the Iranian economy, and were likely to bring about a change in Tehran’s nuclear program.

Monti also expressed his concern over the rocket fire on the South from Gaza, and expressed his solidarity with the residents there.

Netanyahu reiterated “the importance of our position that Iran be prevented from achieving nuclear weapons and that sanctions and international pressure must be applied to this end.”

Monti arrived in the country at the head of a six-minister delegation to take part in the third annual meeting between the local and Italian governments. Both premiers signed a joint statement noting progress in bilateral relations and pledging their determination to enhance and expand cooperation in the fields of security, economics, social issues and culture.

“Italy is one of Israel’s European trading partners, and today, thanks to the joint statement and the agreements that we signed, we have provided additional infrastructure for our bilateral relations,” Netanyahu said.

The two countries signed five bilateral agreements dealing with hi-tech, aid to developing countries, cooperation in the fields of culture, education and science, youth and students, and mutual recognition of driver’s license.