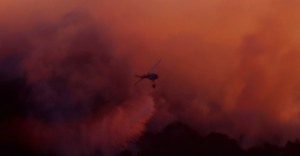 Fires have ravaged more than 8 million hectares (19.8 million acres) of land across the country, an area nearly the size of Austria, killing 25 people, destroying thousands of building and leaving some towns without electricity and mobile coverage. According to a BBC report, at least 480 million animals have been killed in the fires so far.

A kangaroo stands at a field illuminated by wildfires in Australia – Photo: AFP

The Biblical Zoo said it will donate veterinary medical supplies meant to be used in Victoria’s East Gippsland region and will include burn creams, milk replacers, wound sprays and hydration concentrates.

Actors, popstars and Britain’s royal family have stepped in to offer support for victims of Australia’s unprecedented bushfires, helping to raise millions for firefighting services and wildlife shelters.

On Sunday, Australian actor Nicole Kidman pledged a $500,000 donation on behalf of her family to New South Wales state Rural Fire Service, without specifying a currency.

On Saturday, Britain’s Queen Elizabeth joined grandsons William and Harry in expressing shock at the bushfires and sent their thanks to the firefighters who risked their lives to save others.

Popstars P!nk and Iggy Azalea, who hails from a blaze-hit region north of Sydney, also raised money to support firefighters and animal rescue.

Up to 3,000 military reservists were called up to tackle the catastrophic conditions.

While bushfires are common in Australia’s dry summers, climate change has pushed up land and sea temperatures and led to more extremely hot days and severe fire seasons.

Actor Russell Crowe, who on Sunday won a Golden Globe award for his work on the Showtime series “The Loudest Voice.” He wasn’t in attendance because of raging wildfires in his native country.

“Make no mistake, the tragedy unfolding in Australia is climate-changed based,” Crowe said in a statement read by presenters Jennifer Aniston and Reese Witherspoon.

For those interested in donating to the Jerusalem Biblical Zoo’s relief efforts to save Australian wildlife, click here.

View the Ynet publication at:
https://www.ynetnews.com/environment/article/Sk1100Ctgl8