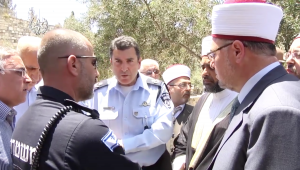 21 Jewish visitors ascend the Temple Mount for 1st time in years without accompaniment of Waqf Muslim security watching their every move, since they refuse to work due to new metal detectors securing the safety of the Holy site.

For the first time since the attack on Friday, 21 Jews visited the Temple Mount on Monday without the accompaniment of the Waqf—the Jordanian security forces charged with preventing Jewish prayer at Jerusalem sites with Muslim significance—due to their objection to the metal detectors set up as a security precaution following the deadly shooting attack on Friday. As a result, the Jewish visitors were only accompanied by the Israeli police.

On Sunday, Jewish and Muslim worshipers were barred from entering the compound due to the tension after the attack, as new screening devices and magnetometers were set up. Prime Minister Benjamin Netanyahu expressed his support of the new security measures, while Muslim and Arab officials and members of the public expressed their extreme disapproval of the move.

After Staff Sgt. Maj. Ha’il Satawi and Staff Sgt. Maj. Kamil Shnaan were killed during the shooting attack, visitors were initially banned from entering the Temple Mount compound. Police hoped to see a return to normalcy on Sunday, with the reopening of two gates, the Gate of the Tribes and the Council Gate, both of which are used by Muslims wishing to enter the site. But the magnetometers placed at the entrances and the security check aroused anger among Muslim worshipers, who started a protest in front of the metal detectors.

Several Muslim protestors were lightly injured as a result from clashes with police.

In recent years, there has been a significant increase in the number of Jewish visitors to the Temple Mount, while the Jordanian government has increased its Waqf personnel.

Though Border Police did not demand that Waqf personnel, many of whom were detained for interrogation following the attack, pass through the magnetometers, they announced they would not enter the compound until the metal detectors and all new means of inspection were removed.

On Sunday morning, the police announced that they would allow Jews to enter the Temple Mount just as Muslims were once again permitted to enter, but in light of the tension created over the attack and site’s temporary closing, it was decided to cancel the Jews’ entry. Jews were, however, allowed into the site on Monday morning, and since the Waqf refused to enter the compound, the 21 Jewish activists who went to the Temple Mount were only escorted by the police, for the first time in years.

“I went up to the Temple Mount for the first time in 1999, and I do not remember anything like this since I’ve been coming here,” said Arnon Segal, a longtime activist in the Temple Mount movement. “We’ll remember the meaning of this day for generations.”

Speaking to Ynet, Police Deputy Commander of the Holy Places Unit Superintendent Shlomi Tubul said, “Our first goal is to restore the place to routine and normalcy as soon as possible.” He continued by saying, “There are Muslims at the Temple Mount, there is no obstacle. We bring in those who want to enter according to the inspection that must be carried out.

“Whoever wants to protest and stay outside is within their rights,” added Tubul. “The police are prepared for all the scenarios familiar to us, with lots of police officers.”