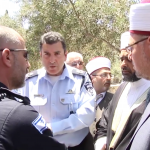 21 Jewish visitors ascend the Temple Mount for 1st time in years without accompaniment of Waqf Muslim security watching their every move, since they refuse to work due to new metal detectors securing the safety of the Holy site.

For the first time since the attack on Friday, 21 Jews visited the Temple Mount on Monday without the accompaniment of the Waqf—the Jordanian security forces charged with preventing Jewish prayer at Jerusalem sites with Muslim significance—due to their objection to the metal detectors set up as a security precaution following the deadly shooting attack on Friday. Continue Reading »