“In the year 2014, after all of the miles travelled and all of the journey of history, this is not just intolerable, it’s grotesque. It is beyond unacceptable,” he told reporters after crisis talks in Geneva on Ukraine.

A notice ordering all Jews in the eastern Ukraine city of Donetsk to register with the pro-Russian separatists or face deportation has been pasted near the local synagogue, Novosti Donbassa news agency reported Thursday. 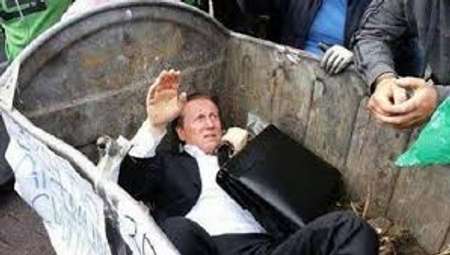 Document that Secretary of State John Kerry referred to calling on Jews in Donetsk, Ukraine, to register – Twitter

According to the report, the notice was distributed by “three unidentified men wearing balaclavas and carrying the flag of the Russian Federation.” The notice was reported by members of the Jewish community of Donetsk and sent to relative abroad, some of them in Israel.

Novosti Donbassa speculated that the men involved were provocateurs who “tried to provoke a conflict, then to blame the attack on separatists.”

The notice apparently bore the stamps of the self-proclaimed People’s Republic of Donetsk and was signed by its self-styled people’s governor, Denis Pushilin.

But the news site tvrain.ru on Wednesday quoted Pushilin as denying any connection to the flyers, calling them a provocation.

The one-page notice orders all Jews over the age of 16 to register at the government building, which has been occupied by pro-Russian insurgents. Jews would also have to pay a registration fee of $50 before May 3 and list all real estate and vehicles owned.

The notice explained the measure as being due to the alleged support of Jewish leaders for the “nationalist junta of [Stepan] Bandera in Kiev” and their hostility “to the Orthodox Donetsk republic and its citizens.”

Failure to register, the notice said, would result in people being “stripped of their citizenship and deported forcibly outside the country with confiscation of property.”

The Jewish community in Donetsk, which numbers some 20,000 people, was reported to be nervous about the notice, even though many felt it was a provocation, citing memories of Nazi Germany’s policies toward Jews.

In a statement sent to Mashable on Thursday afternoon, the Anti-Defamation League questioned the notice’s authenticity, while condemning the “cynical” messaging it contained.

“The ADL today condemned the appearance of anti-Semitic fliers in Donetsk, Ukraine, and called on all parties involved in the political conflicts in Ukraine to refrain from ‘cynical and politically manipulative’ exploitation of anti-Semitism,” said Abraham H. Foxman, ADL National Director.

“We are skeptical about the flier’s authenticity, but the instructions clearly recall the Nazi era and have the effect of intimidating the local Jewish community,” he said.

“We have seen a series of cynical and politically manipulative uses and accusations of anti-Semitism in Ukraine over the past year,” Foxman added. “The perpetrators and their targets are opposing politicians and political movements, but the true victims are the Jewish communities. We strongly condemn the anti-Semitic content, but also all attempts to use anti-Semitism for political purposes.”