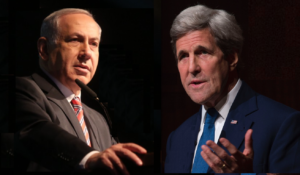 Former Israeli Ambassador to the US and current Kulanu MK Michael Oren made a rare public jab at a senior Obama administration official on Wednesday, accusing former Secretary of State and the 2004 Democratic presidential nominee John Kerry of harboring an ‘obsessive’ anti-Israel bias and antipathy towards the country’s Prime Minister, Binyamin Netanyhau.

The “Deal at any Price” – Kerry facilitates hundreds of billions of dollars to Iran, freedom to test ballistic missiles and freedom to expand politicly & militarily throughout the mid-east unencumbered, as long as Hossein Fereydoun and Mohammad Javad Zarif accept the Joint Comprehensive Plan of Action, July 14, 2015 – U.S. State Department photo

In an interview with the Jerusalem Post Wednesday, Oren addressed Kerry’s comments to The Associated Press on Tuesday in which he slammed Israel and Prime Minister Netanyahu for “genuinely agitating toward action” against the Tehran regime prior to the signing of the 2015 Iran nuclear deal.

In response to Kerry’s claim, MK Oren accused the former Secretary of State and Massachusetts senator of harboring “a particularly acrimonious and sometimes obsessive place for us, and for the Prime Minister.”

Oren also blasted the Obama administration and Kerry over the 2015 Iran nuclear deal, calling it a “collapse’ of American credibility in the region.

“He also thinks that the Iran nuclear deal was a historic diplomatic achievement. I personally feel that it was the collapse of American credibility in the Middle East and a significant danger to our future and the future of our children. That is a huge difference.”

The former Israeli Ambassador said Kerry’s animosity towards the Jewish state was revealed in a December 28th, 2016 speech attacking Israel over the issue of Jewish communities in Judea and Samaria.

Israeli ambassador to the U.S. Michael Orent on The Colbert Report. – YouTube screenshot

“Kerry gave an hour-and-a-half speech about the settlements, talking about how American ideals drove him to go against the settlements,” said Oren, adding that the speech was “indicative of a certain mindset toward Israel.”