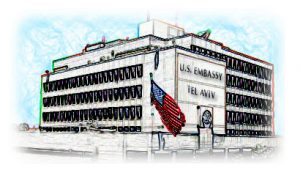 Jordan’s Information Minister warned moving the embassy could affect relations between the U.S. and Jordan, stressing the move would be a “red line” and there will be “catastrophic” repercussions if Trump moves the U.S. Embassy to Jerusalem.

Jordan’s government spokesman warned on Thursday of “catastrophic” repercussions if President-elect Donald Trump follows through with his campaign pledge to move the U.S. Embassy in Israel from Tel Aviv to Jerusalem.

Current location of the Embassy of the United States in Tel Aviv, Israel – Wikimedia Commons

Trump repeatedly promised during the campaign to move the embassy if elected. His campaign manager Kellyanne Conway indicated last month that moving the embassy to Jerusalem “is a very big priority” for Trump, while media reports in Israel at the time indicated the transition team for Trump is already looking into possible locations in Jerusalem for the embassy.

But, speaking Thursday with The Associated Press, Jordan’s Information Minister Mohammed Momani warned such a move could affect relations between the U.S. and regional allies, including Jordan.

He stressed that moving the embassy move would be a “red line” for Jordan, would “inflame the Islamic and Arab streets” and serve as a “gift to extremists.”

Momani also said that Jordan would use all possible political and diplomatic means to try and prevent such a decision.

Moving the U.S. Embassy to Jerusalem “will have catastrophic implications on several levels, including the regional situation,” Momani told AP, adding countries in the region would likely “think about different things and steps they should take in order to stop this from happening.”

“It will definitely affect the bilateral relationship between countries in the region, including Jordan, and the parties that will be related to such a decision,” he stressed.

The possible move of the American embassy has been met with anger from Palestinian Authority (PA) officials, who demand that eastern Jerusalem be the capital of a future Palestinian state.

This week, PA chairman Mahmoud Abbas warned of “serious implications” if the embassy is moved, saying, “Moving the embassy will have serious consequences not only for the Palestinian people, but also for the legitimacy of the entire international struggle against the occupation.”

Saeb Erekat, the secretary general of the PLO, threatened last week that if the United States moves its embassy to Jerusalem, the Palestinians will demand that Arab countries expel U.S. ambassadors from their capitals.

He also warned that the Palestinian will take steps against Israel, such as reducing security and economic coordination as well as consider backtracking on its recognition of Israel.

Erekat has previously warned that moving the American embassy in Israel to Jerusalem would “destroy the prospects of peace”.