The Israeli dairy herd management firm AfiMilk has won a 12 million-euro tender with the Belarus government to provide its advanced milking parlors to locations around the Eastern European country. 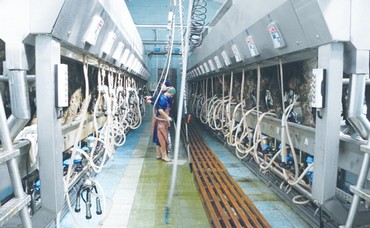 In light of a recent Russian decision to largely cease purchasing Belarusian dairy products, the smaller country’s government decided that its dairy products needed to expand outside of the Russian market – which accounted for 95 percent of its dairy exports – and bring its dairy systems up to European standards, according to AfiMilk. Therefore, Belarus  President Alexander Lukashenko recently approved an agreement to establish 135 new and upgraded milking parlors by the end of 2012, for which AfiMilk will be supplying the complete parlor systems, including all the necessary hardware and software to manage the cattle, the firm said.

AfiMilk, owned jointly by S.A.E. out of the northern Jordan Valley’s Kibbutz Afikim and Fortissimo Capital, has integrated its dairy herd management technologies at farms in over 50 countries across five continents. Just a month ago, the company won a large tender in China – $500 million to build milking parlors serving a total of about 50,000 cows.

Upgrading the Belarusian milking system is a direct result of Russia’s ban on the import of 1,200 dairy products from Belarus. The reason for the ban, according to media reports, was that Belarusian manufacturers were violating new packaging laws accepted in Russia.

A spokesman for AfiMilk described this as a “crushing blow” for the Belarusian dairy industry, as 95% of its dairy exports had previously gone to Russia and because about one in 10 Belarusians work in agricultural industries. In what has been dubbed Belarus’s “milk war,” Lukashenko decided that the country needed to become a milk marketer to European countries, and thereby acclimate to EU standards, according to AfiMilk.

Yuval Rachmilevitch, CEO of AfiMilk, stressed that upgrading the existing milking systems as well as establishing new ones is going to increase Belarus’s milk production by 50% over the coming years. In entering the Belarus milk market, AfiMilk is also excited to create a relationship with the country’s milking parlor company Promtechnika, which has been producing advanced equipment there for 12 years, accounting for 42% of Belarus’s daily milk yield, he explained.

“In Belarus there is an ideal combination between a strong, aggressive and professional partner and a supportive government that wants to increase milk production dramatically,” Rachmilevitch said.