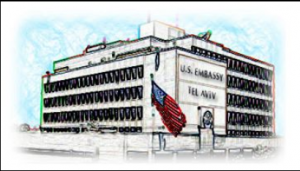 The King also wrote a letter to Palestinian Authority President Mahmoud Abbas, said Sky News, in which he vowed that Morocco holds a “deep belief in justice for the Palestinian cause and that what they have done to the city of Jerusalem is of utmost importance.”

“We reiterate to your Excellency that we will spare no effort in the defense of this holy city, and the support of her people and the maintenance of their legitimate rights, which are guaranteed to them under international law and resolutions of international legitimacy and the provisions of the fourth Geneva Convention,” he added.

Meanwhile, Jordan’s King Abdullah II on Tuesday met with members of the US congress on Washington and likewise cautioned against moving the embassy.

According to the Jordan Times, Abdullah told members of the Senate’s Appropriations Committee and Armed Services Committee, as well as chairpersons and members of the US House of Representatives’ foreign affairs and armed services committees, that moving the embassy could not only undermine peace efforts, but also damage the war on terror in the Middle East.

“The transfer of the embassy would destroy the chances to establish peace and implement the two-state solution, while also hurting the chances of success in the war against terrorism,” King Abdullah said, adding that negative ramifications from the decision are rooted in the importance of Jerusalem to Arabs and Muslims.

“Such a decision would send the people into the despair and anger and allow extremists to spread their dark ideas,” he told the congressional members.

Last month Jordan’s government spokesman warned that the relocation of the embassy was a “red line,” and would result in “catastrophic” consequences.

In a September meeting with Israeli Prime Minister Benjamin Netanyahu in New York, then-candidate Trump said that if elected, the United States would recognize an undivided Jerusalem as the capital, and at the annual AIPAC conference Trump promised to relocate the embassy.

After the election, top Trump aide Kellyanne Conway said the campaign promise to see the embassy moved is a “very big priority.”

Trump’s pick for ambassador to Israel, Attorney and campaign adviser David Friedman, has said that he looks forward to working for peace “from the US embassy in Israel’s eternal capital, Jerusalem.”

Israel captured East Jerusalem from Jordan in the 1967 Arab-Israeli war and later annexed it, in a move never recognized by the international community.

Jordan is widely accepted as the guardian of Islamic holy sites in Jerusalem, retaining custodial rights over the al-Aqsa Mosque complex in Jerusalem’s Old City as part of its 1994 peace agreement with Israel.

Jerusalem is a contentious issue in final status peace talks between Israel and Palestine, both of which claim Jerusalem as their capital. Many states formally adhere to the United Nations proposal that Jerusalem should have an international status and do not view Jerusalem as the capital of Israel. Most foreign embassies are stationed in Tel Aviv.