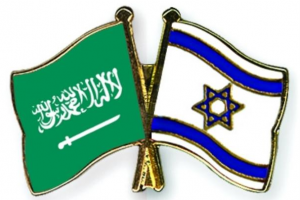 Yaari cited influential female Saudi columnist Saham al-Kahtani, who recently wrote that the description of Jews as the “sons of apes and pigs” in the Quran relates to the period in which the book was written, and not to the Jews of today.

Yasser Hijazi, columnist in the respected newspaper al-Riyadh, wrote two articles that called upon the Arabs to “leave behind their hostility and hatred of Jews” and abandon “Judeo-phobia.” He noted that as a child he had been taught to despise Jews as representing all that was evil in the world and said that this approach had “robbed” the Arabs of the ability to see things realistically, “without blaming an entire nation for the sins of individuals.”

Columnist Ibrahim el Matroudi, was quoted as telling the Saudis that they have been too busy “cursing the Jews instead of drawing benefits from studying their successes.”

Ahmed Adnan, writing in the Saudi-owned website Al Arabiya, argued that the Saudis should speak to Israel according to their own national interests, and without mediators.

MEMRI explained that there is currently a vociferous public debate in Saudi Arabia following the visit to Israel of a former Saudi general, Anwar Ashaki, in July. Ashaki even posed for a photograph with Israeli parliamentarians, causing great consternation in conservative Saudi circles. The current slew of articles appears to be preparing Saudi public opinion for further normalization of relations with Israel.

The thaw in Israeli-Saudi relations is a direct result of the two nations’ common fear and enmity toward Iran, which appears to be headed toward nuclear weapon production, thanks to its agreement with the US and other world powers.