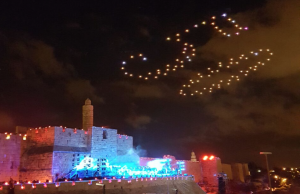 Sources told The Jerusalem Post that either President Donald Trump or Vice President Mike Pence will participate in the event on Capitol Hill, alongside Speaker of the House Paul Ryan, its host. In Israel, Prime Minister Benjamin Netanyahu and Knesset Speaker Yuli Edelstein will take part from the Knesset. All members of Knesset and both houses of Congress have been invited to the event, which was organized by Ambassador to the US Ron Dermer.

While the US does not officially recognize Israeli sovereignty in the parts of Jerusalem that Israel liberated in 1967, White House participation in the event could be viewed as tacit acknowledgment of Israel’s position regarding Jerusalem. The event comes after Trump became the first sitting US president to visit the Western Wall during his trip here last week but held back from making any mention of Jerusalem Day, celebrated the day after he left the country.

In his letter to the senators and the congressmen, Edelstein wrote that Jerusalem, “the eternal capital of the State of Israel, is the seat of our parliament – the Knesset. Jerusalem is also the city where the prophets of Israel spoke to the world of the universal values of morality, equality, freedom and monotheism. In Jewish tradition, this is the city where heaven and earth are linked together and the home of the holy Temple [is situated], sacred to all Jews around the world.”

Edelstein pointed out that people of all religions come to pray in Jerusalem and described the custom of writing wishes to God and putting them in the cracks of the Western Wall. He invited American lawmakers to send him their prayers.

“I will make sure your notes are placed between the sacred stones of the Western Wall,” he wrote.

So far, the Knesset has received 15 notes to put in the Kotel.

The event comes along with a strong push from Jerusalem to recognize the city as Israel’s capital.

Netanyahu called on the US and all other countries to move their embassies in Israel to Jerusalem. Education Minister Naftali Bennett and Jerusalem Affairs Minister Ze’ev Elkin both asked Trump to recognize the capital during his visit to Israel last week.

With President Trump at the Kotel wearing a kippa, a clear message was sent as to the site’s Jewishness – Screenshot: White House/YouTube

While Trump did neither of those things, he mentioned the millennia of Jewish history in Jerusalem during his address at the Israel Museum.