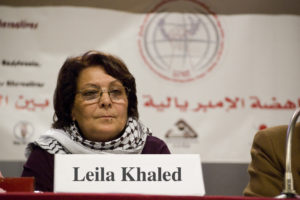 Khaled, a member of the Popular Front for the Liberation of Palestine, was involved in the hijacking of an American airplane in 1969 and a failed hijacking attempt on an El Al flight the following year. Israeli security forces foiled the second attempt and subdued Khaled. The flight was diverted to London, where Khaled was then handed over to British authorities. They released her less than a month later in a deal to free hostages from another hijacking.

Tuesday’s conference was organized by the European United Left-Nordic Green Left (GUE/NGL) Coalition, a left-wing political bloc in the European Union that officially supports the boycott, divestment and sanctions movement against Israel. The GUE/NGL coalition hosted members of the Israeli left-wing organization Breaking the Silence at a similar event two years ago.

Besides Khaled, the conference’s speakers included a representative of Addameer, a Palestinian prisoner aid organization with ties to the PFLP, and Ahed Tamimi, a young Palestinian activist known from videos showing her protesting against Israeli soldiers.

NGO Monitor, a watchdog group that promotes greater transparency among foreign-funded Israeli nongovernmental organization, sent a letter of complaint to the president of the European Parliament, the EU ambassador to Israel and several MEPs. The letter called on recipients to investigate whether EU resources were used to hold this event.

Olga Deutsch, head of the Europe Desk at NGO Monitor, said, “We call for the elected leadership of the European Parliament to look into the details surrounding this event, and investigate whether the funds used to arrange the conference violate EU regulations.”

Tomas Zdechovsky, an MEP from the Czech Republic, said it was outrageous for EU lawmakers to desecrate the halls of the assembly by hosting Khaled, a notorious terrorist. In addition, the organization she represents, the PFLP, is recognized by the EU as a terrorist organization, he emphasized.