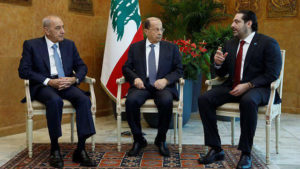 President Michel Aoun, Prime Minister Saad Hariri, and Parliament Speaker Nabih Berri agreed to act to prevent Israel from building a wall on Lebanese land at the frontier, and threatening an offshore energy block in disputed waters. Israel says the wall is being built on its territory.

Arguments over the wall and Lebanon’s plans to explore for offshore oil and gas in the disputed maritime waters have elevated tensions between Israel and Lebanon.

The Lebanese-Israeli border has been calm since the month-long war of 2006 between Israel and Hezbollah, which killed around 1,200 people in Lebanon, mostly civilians, and 160 Israelis, most of them troops.

Israel says the wall it is building is on Israeli sovereign land. The Lebanese government says it passes through territory that belongs to Lebanon but which lies on the Israeli side of the Blue Line, where the UN demarcated Israel’s withdrawal from southern Lebanon in 2000.

The three leaders [Pictured above] met to study the recent “Israeli threats, and saw in them … a direct threat to the stability” of the border region, the president’s office said in a statement.

They agreed to take measures “at various regional and international levels to prevent Israel from building the cement wall…and from the possibility of infringing on Lebanon’s oil and gas wealth and its (territorial) waters,” it said.

Israel’s Defense Minister Avigdor Lieberman, addressing the dispute last week, accused the Lebanese-based terror group Hezbollah of provocations, saying Israel had withdrawn to the recognized international border with Lebanon and was being challenged over a barrier in Israeli territory.

The sides met under the supervision of the UN peacekeeping force UNIFIL in their regular tripartite meeting at UN positions in the Ras al-Naqoura border area.

“The Lebanese side reviewed the matter of the wall which the Israeli enemy intends to build … confirming the position of the Lebanese government rejecting the construction of this wall as it violates Lebanese sovereignty,” the Lebanese army said in a statement after Monday’s meeting.

In a statement, UNIFIL said the meeting had received great attention “due to engineering works south of the Blue Line previously announced by the Israeli side.”

UNIFIL force commander Major General Beary noted there had been a “period of relative calm” since the last tripartite meeting.

“However, there has been a great deal of activity along the Blue Line. I would like to acknowledge the restraint exercised by both parties in decreasing tension and maintaining stability. No one wants to return to a period of escalating tensions and a breach of the cessation of hostilities,” he said.

In the meeting, the Lebanese side also rejected recent Israeli comments about Lebanon’s offshore energy exploration, the army statement said.

On Wednesday, Lieberman described as “very provocative” Lebanon’s first offshore oil and gas exploration tender and said it would be a mistake for international firms to participate.

Lebanon has an unresolved maritime border dispute with Israel over a triangular area of sea of around 860 sq km (330 square miles) that extends along the edge of three of five blocks Lebanon put to tender early last year.

Lebanon in December approved a bid by a consortium of France’s Total, Italy’s Eni and Russia’s Novatek for two blocks. One of the awarded blocks, Block 9, borders Israeli waters.