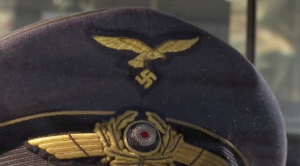 To guarantee the items “don’t fall into the wrong hands,” a Lebanese businessman donates Nazi items he purchased from a German auction to an Israeli foundation, including Adolf Hitler’s top hat, among other personal possessions.

In a “noble act of the first degree,” Lebanese-Swiss businessman Abdallah Chatila purchased Adolf Hitler’s top hat, among other personal belongings, in an auction of Nazi memorabilia in Munich, and said he was “planning to donate them to the Jewish people.”

According to various reports, Chatila spent some €550,000 at the German auction house Hermann Historica – an auction which caused a German and international uproar last week.

In addition to the top hat, the businessman acquired some 10 total articles, including Hitler’s cigar box and writing machine, as well as a luxury edition of his book Mein Kampf, containing an eagle and swastika insignia belonging to the Nazi leader Hermann Goring.

He told Israel Hayom on Sunday he would donate the items to the Israel-based Karen Hayesod Foundation.

Chatila said: “I saw in the media that there was a complaint about the auction house and I quickly approached the Keren Hayesod Foundation – with which I am in contact, with the goal of preventing these objects from falling into the wrong hands. We live in a time where views are becoming too extreme in all directions. Under these circumstances, dangerous anti-Semitism and anti-Zionism are growing and such items could serve them.

“Everything happened quickly. I donated [the items] to Keren Hayesod and they will decide whether they are transferred to Yad Vashem or any other body,” he added.

Top- hat with the initials of Adolf Hitler prior to the auction in Grasbrunn, Germany, last Wednesday – Photo: Matthias Balk:dpa via AP

Chairman of the European Jewish Association Rabbi Menachem Margolin thanked Chatila, saying “his deed is a noble one of the first degree. In light of the fact that the auction house insisted on promoting the sale, despite the protest, it is touching to see that even in 2019, there are still people in the world who act beyond cynicism to make sure these despicable items would not be used to glorify the Nazi legacy.”

Ahead of the auction, Margolin said in a letter to Hermann Historica that the sale was a disgrace.

“You all say ‘Never Again,’ make it so,” he wrote. “Selling such items should be no different than selling the personal items belonging to Osama Bin Laden, or Anders Breivik.”

Keren Hayesod said in a statement: “We will handle the items with reverence and when they come to us we will consult with all the relevant bodies to make the best decision possible about what to do with them.”

Chatila earlier told the weekly Swiss newspaper Le Matin Dimanche that he bought the memorabilia “so it would not be used for purposes of neo-Nazi propaganda.”

“The far-right and anti-Semitism are gaining momentum across Europe and the world, which is why I didn’t want the items to fall into the wrong hands,” he said, adding that in his opinion, “they should be burned.”

Born in Beirut in 1974 to a family of Christian jewelers, Chatila is one of the 300 wealthiest people in Switzerland. He made his fortune in diamonds and real estate in Geneva.

Parts of this article were originally published by i24NEWS.